Summary: Fun classroom activities for past tenses for hypothetical situations, including linking to the same structures in conditionals 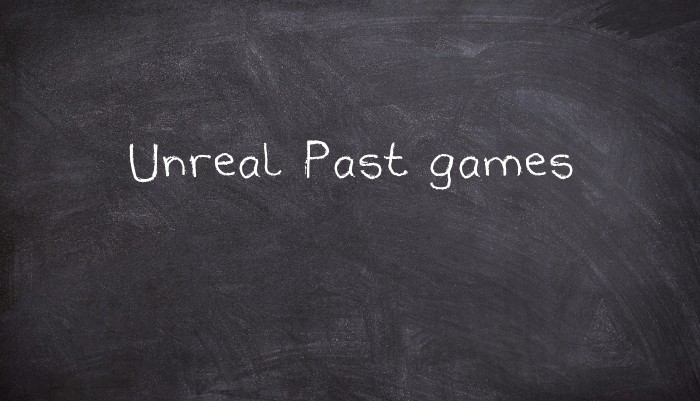 The concept of “Unreal Past” is vital for explaining forms like “I wish I was better at sport”, “If I only I hadn’t invited him” and “If I hadn’t invited him, many more other people would have come”. As Second Conditional and Third Conditional are basically just Unreal Past with “if”, the best games are often ones that combine conditionals and other forms like “I wish…”, to make that connection clear. It can also help students who already know conditionals with “I wish…” etc. The games below therefore start with ones which can combine Second Conditional, Third Conditional, mixed conditionals and other uses of Unreal Past. Some, such as the whole sentences version of the bluffing games, can also be used before presenting the language.

One person says a regret with “I wish/ If only” like “I wish I had gone to university”, perhaps with a reason like “If I had got a degree, I would be able to apply for better jobs now”. The other person tries to say why that isn’t a legitimate regret with a conditional sentence like “If you had gone to university, you would have got bored with studying and wouldn’t want to learn English now”. The first person uses another conditional sentence to reinforce their original sentence and/ or cancel out their partner’s objection like “But if I had gone to university, I would have been able to get a job at a company who would pay for my English lessons” or “If I had learnt English at university, I would be able to save money on English lessons now”. This continues until one of the students gives up, with the last person to speak winning if you want to turn it into a competition. They then switch roles and do the same.

The same thing works for complaints like “If only you didn’t know so much more English vocabulary than me” and “I wish you hadn’t written in my book”.

As a slight variation, you can ask students to try to say something that their partner can’t disagree with like “I wish public toilets were cleaner”, with one point for anyone who can think of an objection like “If the toilets were cleaner, people would spend much more time in there and so you’d have to wait for ages just to go for a pee”. They then switch roles and do the same (without any further discussion, unless they think their partner’s objection doesn’t make sense).

Unreal Past and conditionals debates

One person starts an argument with Unreal Past such as “I wish we lived in a perfect world, but actually some people are just violent, so we need guns to protect ourselves against them” or “I wish they hadn’t voted for Brexit, but they did, so we have to live with it”. The other person responds with a conditional sentence like “I would agree with you if…” or “I could accept that providing…” They discuss that as long as they like (with other language also fine later on in the discussion), then switch roles and do the same.

Students are given sentence stems to prompt use of Unreal Past such as “If I hadn’t…”, “I wish…”, “I would…” and “If only I had…”, plus maybe some contrasting forms which don’t need Unreal Past like “I hope…” and “If I see…” Perhaps after giving them some time to complete at least half of the sentences, there are then three games you can play with these sentences.

If they filled the gaps with a mix of true and false information, you can play a bluffing game where they try to guess if their partner’s sentences are made up or not. With all true information, they can play a guessing game by reading out just the part they wrote and seeing if their partner can guess which sentence they wrote that in, i.e. which sentence stem it goes with. Alternatively, they can just try to find things in common starting with those stems, especially if the stems contain suitable language like “We…”

Give students a list of Unreal Past sentences and/ or situations where you might say such things such as “After your divorce”. To play a guessing game with these, one student can say what complaints and regrets they might have in one situation until their partner guesses the situation. Alternatively, they can say what situations one regret or complaint might be said in until their partner guesses the Unreal Past sentence.

In a similar way, you could give a list of descriptions of people such as “An old rock star” for someone to secretly choose. They then say that person’s regrets and/ or complaints until their partner guesses who is speaking.

To add conditionals, you could get students to guess reasons for complaints and regrets, for example “If you had been a boy, playing baseball with your dad would have been more useful and fun” for “I wish I had been born a boy”. It’s best to give them useful phrases for playing the game like “That’s also true/ possible, but not the sentence I was thinking of”.

As well as the sentence completion bluffing game above, you can also give students some typical complaints and regrets to read out, with their partner asking for more details and then guessing if those statements are true for the person who said them or not. Something similar can also be done with key words, with a coin (flipping to see if they should use Unreal Past or not and/ or if they should make a positive or negative sentence), or with a dice (to decide the sentence starter, topic, etc).

As well as using a coin or dice, you can also give students a pack of cards to use during bluffing games, with each card including a topic, key word, sentence starter, etc. These can also be used for other activities such as guessing games.

The sentence transformations game below is also a kind of card game.

In addition to deciding what language to use during bluffing games, a coin can also decide if you should say the same (true) thing as your partner just said or something different, for them then to then guess the truth of.

Some coin games can also be used without bluffing, e.g. flipping a coin during Unreal Past Competitions to decide whether each sentence should be positive or negative.

As well as bluffing games, a dice can decide what topic to talk about, what sentence starter to use, etc for other games in this article such as competitions.

You can also use a dice for any of the coin games above by deciding that numbers 1 to 3 are equivalent to heads and rolling a 4, 5, or 6 is like getting tails. This is good for combining the two kinds of games, e.g. rolling once to decide what situation to roleplay and then rolling during the roleplay to decide if each sentence should be about the present or past.

This grammar often comes up in the key word sentence transformations of Cambridge Proficiency, Advanced and (especially) FCE. For example, in the exam students may be asked to convert “I regret inviting him” HAD to “I wish I hadn’t invited him”, with the word in capitals being a key word which must be used.

This exam task can be made into a game by making cards with one version on each side. Students compete to make all the conversions from the sentence on one side of the card to the sentence on the other, without mistakes. For example, if one card says “I would be far happier if I had more money DO” and they guess correctly that the other side says “I do wish I had more money”, that cards stays turned over, and the same person can try the next card. When they have made a mistake and the next person tries, they will have to convert from “I do wish I had more money HAPPIER” back to the first side.

The winner can be:

Students compete to make their holiday sound more terrible, their university choice sound like more of a mistake, etc, using Unreal Past sentences like “If only they had put glass in the windows” and “I wish I hadn’t chosen to research strikes. Now no company with ever give me a job”.

Past or not simplest responses game

This can be used for presentation or very easy practice, including combining Unreal Past with past tenses for politeness reasons like “Was there anything else?” and “Could you…?” It’s particularly good for clearing up typical confusions.

Students listen to sentences like “I wish I wasn’t so short”, “I was quite short then”, “If only I hadn’t jumped off that wall” and “I hope he doesn’t jump off that wall” and hold up a card saying “Past” or a card saying “Not past” depending on the meaning (not the tense) of the sentence. Students can then label the same sentence with “P” for past and “X” for not past on a worksheet, test each other, brainstorm past tense sentences that aren’t about past time, etc.

One person explains a regret or complaint like “I wish I was thinner” or “If only I had gone to a different university” and the other person responds with something like “You should wear vertical stripes” and “You should do an MA, in a better uni this time”. If you want to make it more competitive, give points for the best advice (in groups of three or more), or challenge them to think of a situation which no advice is possible for like “I wish I wasn’t human” or “If only I didn’t have to die someday”.