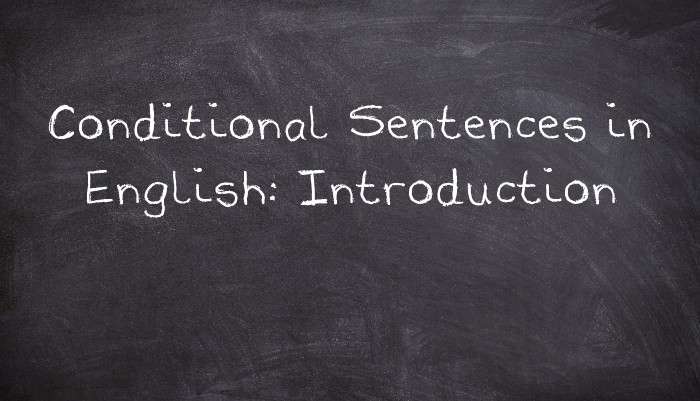 This article is the introduction to an eight-part series on Conditional Sentences in English:

What are 'conditional sentences'?

Conditional sentences refer to what the speaker presents as possible/hypothetical situations and their possible/hypothetical consequences/outcomes. In their simple form they consist of a main clause [consequent clause, matrix clause] [1] and an IF-clause [conditional clause, antecedent clause]. The most common introduction to an IF-clause is, as the name suggests, the word IF.

For the sake of simplicity, the IF-clause appears first in these notes. It is normally possible to put the IF-clause second, with no change in meaning. Most of the IF- and main clauses are presented as statements, but interrogative forms also occur frequently:

4. What will you do if she doesn’t accept?

It is also possible, in more formal style, to embed the IF-clause within the main clause:

1a.You will, if you do not hand in the paper, fail the course.

In these notes we look at the topic in a different way. Conditional sentences are considered as falling into four classes:

Factual Conditionals The speaker presents the ‘condition’ as a fact: 5. If you heat ice, it melts.

Predictive ConditionalsThe speaker presents the condition as a real possibility; The situation presented in the if-clause may happen, but it may not: 6. If it rains tomorrow, we’ll call off the walk.

Hypothetical ConditionalsThe speaker presents the condition as imaginary. Its possibility is accepted, but seen as remote: 7. I would stop work if I won the lottery,

Counterfactual Conditionals The speaker presents the condition as something that has no existence in reality.  It did not happen, or is not happening: 8. If Paul hadn’t got the job, he would have moved to America.

At first glance these four type-classes appear very similar to the traditional Zero, First, Second and Third Conditionals. However, as we shall see in the other sections, there are a number of important differences.

Vital words in the overview of the four types A to D were: The speaker presents. When speakers present an action or a state in conditional terms, they are implicitly stating their views of the possibility/reality of that action or state; other speakers may view it in a different light. There is no exclusively ‘right’ way of saying it. This can be illustrated by two speakers considering the possible arrival at a dull party of a person they like. The first, an optimist might say:

9. If Michelle arrives, she’ll brighten things up. (It is possible that she will arrive.)

The second, a pessimist, might say: 10. If Michelle arrived, she’d brighten things up. (The possibility of her arrival is less than in #9.)

These two utterances may be contrasted with that of a third, far more optimistic, person, who views the arrival as certain.

11. When Michelle arrives, she’ll brighten things up. (It is certain that she will arrive.)

#11, the last example, is not a conditional clause. When presents the action or state in the antecedent clause as a fact; if presents it as a possibility. Some learners have problems differentiating the two. These problems may be caused by there being no separate words for if and when in your own languages.

There are separate sections on the four classes of conditionals (links above, and on  Alternatives to IF, Other expressions with IF and  Non-conditional ‘conditionals’)