Summary: A look at factual conditionals 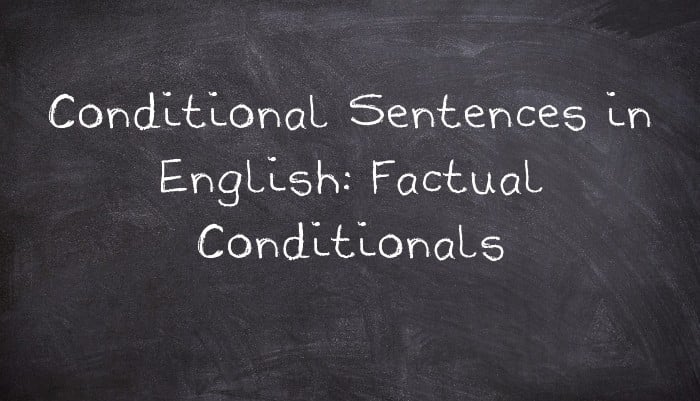 In #12, the melting of the ice is presented as a consequence of heating it - on every occasion that it is heated. This is a consequence independent of time; it is a general truth based on physical law and this construction is frequently used in scientific writing. In practice, the meaning is similar to utterances using when or whenever:

In factual conditionals that are general truths, we normally use a present tense in both clauses; it is the natural tense for general time. It is possible however to use modals; will, for example, adds the idea of absolute certainty. Note that in 12b, below, we are presenting a general truth, not a future possibility:

Other tenses and aspects of the verb, as well as modals, are also possible in either clause in the appropriate situation:

15 If water has been boiled for twenty minutes, it is completely sterile.

16. If the metal snaps, it has been subjected to extreme stress.

18. If you can speak Swedish, you can understand Danish.

In #13, above, If Andrea cooks, I wash up, the speaker’s washing up and the consequence of Andrea’s cooking are presented as habitual acts. As with general truths, the meaning is similar to utterances using when or whenever. However, unlike general truths, which are not limited in time, habitual acts can be limited in time, and a wide range of tenses and modals is possible, for example:

19. If Carol is working in the garden, Peter often goes down to the pub. (generally)

Note that in #13a, the words may be roughly paraphrased as: On those occasions when Andrea cooks, I am willing to wash up. (The implication is that on those occasions when she does not cook, I am not willing to wash up.) In a different context, the words could refer to a future possibility: either Andrea will cook, or she won’t; (The implication is that in the second case I will not wash up.

In examples #12, If you heat ice, it melts, a general truth, and #13 If Andrea cooks, I wash up, a habitual act, the IF-clause action/state reported by the speaker was known before the reporting. In #14, If it’s ten o’clock already, then I’m late,the situation is different: the situation was unknown to the speaker until moments before the utterance. Indeed, such utterances are frequently preceded by another speaker providing the knowledge; in #14, it would be the other speaker saying, “It’s ten o’clock”.  In the subsequent conditional, if conveys a similar meaning to given that, accepting that. The whole conditional clause is sometimes replaced by some other expression with if: if [that is] so, if that is the case; or without if: that being so, in that case.  A range of tenses and modals is possible:

Speaker B: You can go home if you have finished.

Speaker B:  If Sue is working on the computer, John, go to the library.

22.[Speaker A: The Lattins will drive you to the airport]

Speaker B:  If the Lattins will drive me to the airport, I’ll be able to leave later.

Speaker B:  If he did that, he worked really hard.

A speaker can, by intonation, indicate disbelief in the accepted condition, but the form is unchanged:

23. (Speaker A: The last candidate says he is a major in the reserves.)

Speaker B: If he’s a major, then I’m a field marshal. Who does he think he’s fooling?

In many of these examples, the main [consequent] clause implies a reality, but it can also carry other overtones, often suggested by a modal:

Speaker B:  If Sue is working on her computer, she must be completing her assignment.  (Logical deduction about present activity)

Speaker B:  If he did that, he must have worked really hard.             (Logical deduction about earlier activity)

In these Factual Conditionals, the wide possible range of tense- and modal-use is more helpful than confusing for learners. Provided you understand how tenses are used, you can say what you wish to; you are not constrained by arbitrary rules about ‘sequence of tenses’. The only ‘rule’ is self-evident: when we speak about factual situations, we can use a tense form to distance in time, but not to distance in reality.