Summary: A look at counterfactual conditionals 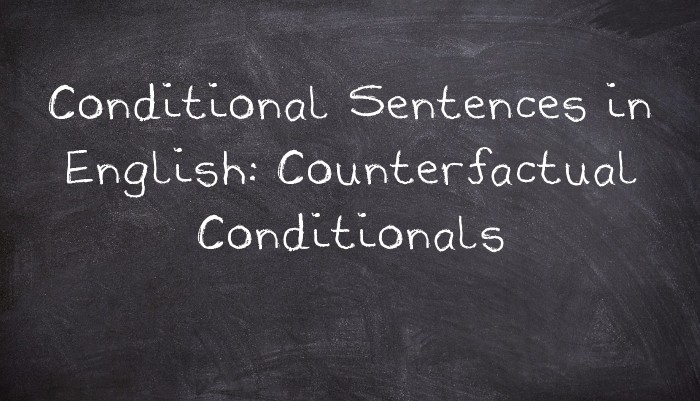 Counterfactual Conditionals, Present and Past Time

48. Present counterfactual state, future hypothetical consequence: I would retire next year if I had more savings (now).

49. Present counterfactual state, present hypothetical consequence: If D H Lawrence were alive (today), he would be horrified by the amount of pornography openly on sale (today).

50. Past counterfactual action, future hypothetical consequence: If I had saved more (in the past),I would retire next year.

51. Past counterfactual action, present hypothetical consequence: If Watson hadn’t bungled that interview last year, he would be the anchorman now.

52. Past counterfactual state, past hypothetical consequence: If it had been fine yesterday, we would have had a barbecue

These examples show that counterfactual conditionals have not only the form of traditional Second, Third and Mixed conditionals but other forms as well.

They can also refer to more time relations than the traditional patterns were generally presented as doing. And, as we shall see later, many modal patterns are possible. Although this might initially appear complex, the underlying system is actually completely logical. With a counterfactual hypothesis about the present, we can show the absence of reality by using a Distancing [Past] tense form. With a counterfactual hypothesis about the past we can show 'double distancing' (from reality and from present time) by using a 'double distancing' tense form. For normal verbs this is the 'Past Perfect.’

With modal + verb, we use the (single-) distanced form of the modal and the (single-) distanced of the infinitive of the verb. One sentence is analysed below to make this clearer. That distancing may be in time or in reality causes no confusion. If the context does not make the time clear, specific time markers are added (in bold print) or implied (in brackets) in the examples #48-#52.  above. Here is an analysis of a counterfactual utterance:

3. f you had not passed the test, you would have failed the course

The situation, known to speaker and listener, is that before the moment of speaking [i.e. in past time] the listener passed the test and so did not fail the course. The not-passing is distanced both for past time and counterfactuality: do not pass → did not pass → had not passed. The consequent later certainty of failing is also distanced both for past time and counterfactuality: will fail → would fail → would have failed.

Speakers are therefore not restricted to a prescribed ‘sequence of tenses’, but can refer to any time relation suited to what they wish to say. As events in the future have not happened yet, we cannot refer in the IF-clause to a counterfactual future action or state. However infinitesimal the possibility, it exists, and therefore can be presented only as a hypothetical, not as a counterfactual action or state. #53 is therefore a possible utterance, #53b is not:

53a. If the sun exploded tomorrow, the solar system would be destroyed.

53b *If the sun had exploded tomorrow, the solar system would be destroyed.

With past counterfactual situations, IF is sometimes omitted in more formal English, and subject and verb are inverted:

50a. Had I saved more [in the past],I would retire next year.

51a. Had Watson not bungled that interview last year, he would be the anchorman now.

52a. Had it had been fine yesterday, we would have had a barbecue

Provided that learners understand thoroughly the meanings conveyed by the modals and the concepts of distancing, hypothesis and counter-factuality, [though not necessarily through the use in the classroom of those terms], you can understand and produce all kinds of conditionals - in the classroom. It will be some time before you produce them fluently in normal conversation for a number of reasons.

The most serious problem that is encountered in the teaching/learning situation arises, perhaps surprisingly, from misunderstanding on the part of teachers who are native speakers.  Let us consider an utterance that causes few problems for learners if they have been introduced to the structure correctly:

54. If I had known that, I would have told her to come sooner.

In informal speech, some speakers incorrectly add an extra syllable, resulting in:

When they render this more slowly in speech, or even in writing, such speakers may produce:

Less educated people may even write:   54b/c.iii. If I had/would of known that, I would of come sooner.

Native speakers need to be aware of the possibility that they might produce these incorrect forms. If they do, their students will become confused.

A second problem for learners is that the verb forms involved consist of from two words [e.g. had worked] to three [had been working, would have worked] or more [would have been working]. This is made worse for learners by the fact that the ‘past perfect’ is constructed differently from the ‘modal perfect’. This last point is hardly surprising - they are different verb forms for different functions, you need to accept that, while you may understand the concepts. You may need time and practice before you can produce the forms.