Summary: A look at predicative conditionals 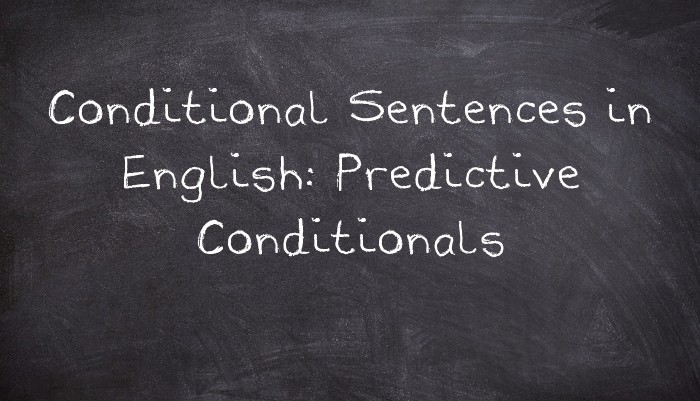 25. If Mary phones, let’s invite her to dinner.

26. If you’re getting bored, why don’t you do something else?

27. We’re going to take strike action if they won’t give us a rise.

29. If the offer has arrived by the end of the week, we’ll accept.

30. If I’m not in the office tomorrow, I’ll have caught the bug that’s going around.

31. I may resign if David gives Celia the job,

32. If Romana arrives tomorrow, I take her to see the new play.

33. If Romana arrives tomorrow, she will have completed the job.

34. George will be here soon, if he managed to catch the train.

Of these seven examples, only #24 fits into the traditional view of First Conditionals:

However, #25 to #34, along with many other possible combinations of tenses and modals, are naturally occurring predictive conditionals. The only ‘rule’ about tenses is the logical one that if we are talking about a real possibility, then we cannot use a form of the verb to distance in reality.  There is no restriction on forms which show how speaker views the situation. The speaker views the main-clause, for example, as certain (#24), a suggestion (#25), an action for which there is present evidence (#27) , etc. The antecedent action or state is viewed as future (#24, #25, and #27-#33), present (#26) and past (#34).  In #28, the antecedent state is a present or future willingness.

The use of the present tense in the main clause of #32 removes all suggestion of ideas such as volition, present evidence or possibility. The future taking of Romana to see the new play is presented as a simple fact, dependent only on her future arrival. In #33, the consequence of the possible antecedent is not the prior actual completion, but the certainty of the prior completion. This becomes clear if we paraphrase the utterance:

33a. If Romana arrives tomorrow, the reason will be... (that she completed the job before her arrival)

In #27, the use of [the negative form of] will implies that the speaker considers their present or future refusal [this will be made clear from context] as an annoying or wilful characteristic.

In #28, will implies a willingness on the part of the person addressed to comply with the speaker’s request.

35 *If it will rain tomorrow, we will stay at home.

and why #36, below, can normally indicate only willingness on Wendy’s part, not certainty:

36. If Wendy will write the report, I won’t have to ask Jim.

As with Factual conditionals, the possible range of tense- and modal-use in Predictive Conditionals is helpful rather than confusing for learners. Provided you understand how the tenses are used, you can say what you wish to say; you are not constrained by arbitrary rules about ‘sequence of tenses’. The only ‘rule’ is moderately self-evident: when we speak about possible future situations, we can use a verb form to distance in directness, as in: if you’d take a seat over there, I’ll tell Mr Morrison you’re here, but not one to distance in reality or time.

Should can be used in the IF-clause, with a meaning similar to ‘happen to/chance to’ suggestingthat the speaker sees the possibility as real, but more remote than with an unmarked [present] tense:

37. If you should run into Paul, give him my regards.

This is one of the few anomalies in the system. Should is the form of the modal shall that is distanced in reality or likelihood. Such distancing forms of the other modals are, logically enough, not used in a Predictive Conditional sentence implying a real possibility.