Summary: A look at hypothetical conditionals 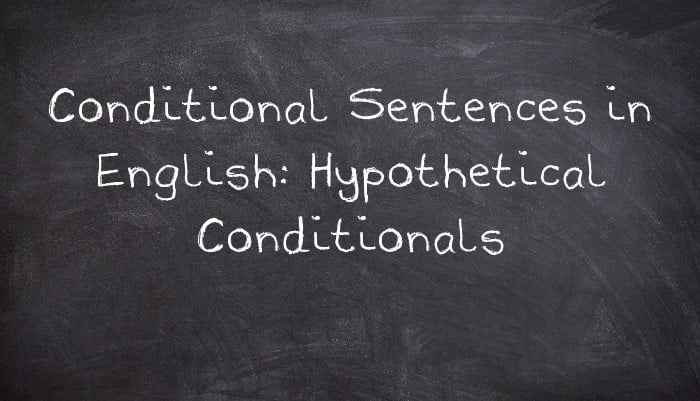 38. If it were fine tomorrow, we would have a barbecue.

39. If Mary phoned, we should invite her to dinner.

40. If you were getting bored, you could do something else.

41. If they wouldn’t give us a rise, we’d take strike action.

42. If David gave Celia the job, I might resign.

43. If Romana would come tomorrow, we could finish the project

In these examples, only #38 fits with the traditional presentation of the Second Conditional:

And yet, all are natural and grammatically well-formed utterances. In each of them the hypothetical [less real] likelihood of the occurrence or existence of the action or state in the IF-clause is shown by a distancing [in reality] form of the verb tense or modal.

In #38, the old subjunctive form were for all persons indicates, as previously noted, absence of likelihood or reality; many younger people today would use was here. Use of was instead of were in hypothetical conditionals is generally accepted now, except, for some people,  in formal writing and speech.

In #41, the use of (the negative form of) would implies that the speaker considers ‘their’ future refusal as an annoying or wilful characteristic. In #43, would implies Romana’s willingness to come. Would conveying the idea of [distanced] certainty is, logically, uncommon in the IF-clause

Modals can be, and frequently are, used in the IF-clause. The reality-distancing forms are

MUST has no distancing form;we use would have to when one is required:

45. If he did it again, George would have to dismiss him.

45. If you spoke French you could work in Quebec.

Here, if the speaker felt the difference in the two meanings were important, s/he might  make this clear by using  one of these two forms:

45a. If you spoke French you would be able to work [capable of working] in Quebec.

45b. If you spoke French you would have the possibility of working in Quebec.

43a. If Romana were willing to come tomorrow, the reason would be...

As many gap-fill exercises, imply that EITHER a predictive OR a hypothetical conditional, but not both, is correct, it is worth repeating a point:  When speakers present an action or a state in conditional terms, they are stating their views of the possibility/ reality of that action/state; other speakers may view it in a differently. There is no one ‘right’ way of saying it. This was shown by the optimist  and pessimist, considering the arrival at a dull party of a person they like.

Even what one speaker sees as a general truth:

may be seen as a hypothetical condition by another:

12c. Speaker A: The main problem if we were marooned in the Arctic would be water. We’d eventually die of thirst.

Speaker B: Not if we had some method of generating heat. If we heated ice, it  would melt, and so we’d have an unlimited water supply.

As with Factual Conditions, should can be used in the IF-clause; it has a meaning similar to ‘happened to/chanced to’ suggesting that the speaker sees the possibility as more remote than with a distancing [past] tense,

46. If you should see Paul, he would be happy to hear your news.

The distancing verb form in the main clause (here: would be) makes it clear that this is a hypothetical conditional, less likely, in the speaker’s mind, than the situation expressed as a predictive conditional:

46a. If you should see Paul, he will be happy to hear your news.

WERE TO: Were to [for all persons], with a meaning very similar to should is also used in hypothetical conditionals:

46b. If you were to see Paul, he would be happy to hear your news.

As in other cases where the old subjunctive form were is used or all persons, there is a growing tendency for was to be used in the first and second persons singular:

47. If it were/was to be fine tomorrow, we could finish the painting.

Inversion: In even more formal English, when should and were to are used, IF is omitted English, and subject and verb are inverted:

15c. Should you see Paul, he would be happy to hear your news.

16a. Were it to be fine tomorrow, we could finish the painting.