Conditional Sentences in English: Alternatives to IF

Summary: A look at alternatives to 'if' in conditional sentences 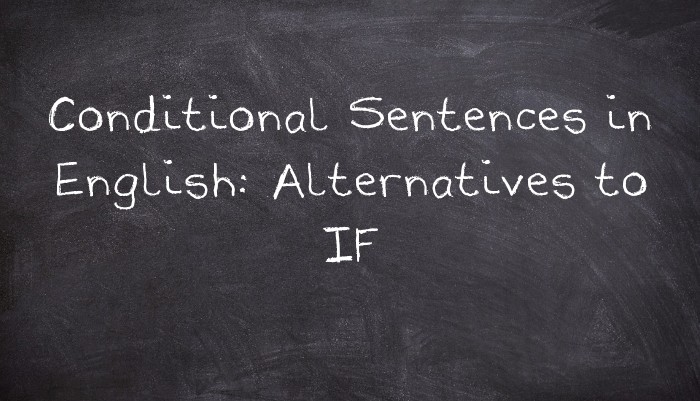 Alternatives to IF - Constructions without IF

Although IF is the most common word used in conditional clauses, which is why they are frequently referred to as IF-clauses, other expressions may be used:

Accepting [that]: Accepting that Phil has had a breakdown, he doesn’t necessarily present a risk.

The situation, that Phil has had a breakdown, is already known to the speaker, and probably the listener; it is an accepted truth, a factual conditional. IF would imply [slight] uncertainty that the information can be regarded as definite, a degree of uncertainty not present with accepting that. The whole conditional clause can replaced by some other expression with IF: if [that is] so, if that is the case; or without IF: that being so, in that case.  A range of tenses and modals is possible:

Given [that]: Given that she has a PhD, won’t she expect more than we can offer?

The situation, that she has a PhD, is also known to the speaker, and probably the listener, though there may be an implication that there is [slight] uncertainty that the information can be regarded as definite. Once again, IF would perhaps imply a greater degree of uncertainty than given that.

Assuming: Assuming that Chelsea lose tomorrow, the manager will be looking for a new job.

Here we are moving from the realm of accepted truth towards a future predictive situation, though assuming carries a greater degree of certainty of the realisation of the situation than IF.

Supposing: What will you do supposing she leaves you?

Supposing suggests an act of imagination, often implying some reservation on the part of the speaker. It is not normally used with factual or counterfactual conditionals.

As/so long as: I would let him have the flat as/so long as he got rid of that dog.

These often suggest some condition imposed by the speaker. Like supposing, they are not normally used with factual or counterfactual conditionals.

Providing/provided [that], on condition that:  I’ll take you to the show providing you finish your homework in time.

The Head promised me the post on condition that I took on the school play.

You could have gone through Minsk, provided you had obtained a visa in advance.

In this construction, sometimes seen in advertisements and notices, and heard in less formally structured situations, the first half of the pair is understood as a factual, predictive or hypothetical conditional; even the verbs may be implied. These two examples can be understood to have the meaning of:

Unless: Unless  is frequently presented as an alternative to IF...NOT, and some English course books give exercises in which learners must change one form into the other, with the [sometimes  explicit] idea that there is no difference in meaning between such utterances as:

In fact, as always, if a different word is used, there is a degree of difference in meaning, even if the practical difference is small. IF suggests uncertainty about the possibility of rain, and consequent uncertainty about the possibility of going swimming. UNLESS has a meaning similar to except in the following situation[s] or if and only if ... not; the certainty of going swimming is greater in the speaker's mind in the first than in the second. How great or small the certainty is within the speaker's mind in is of course known only to the speaker at the time of utterance.

This is why in counterfactual hypotheses about the past, UNLESS is far less commonly used. In the first sentence, below the speaker mentions one situation that would have made his parents unhappy; the possibility exists of there being other situations that would equally have made them unhappy. The second sentence would imply that the parents would have been unhappy in every contingency except the speaker's going to university - theoretically possible but unlikely.

My parents would have been unhappy if I hadn't gone to university.

? My parents would have been unhappy unless I had gone to university.

In addition, as we have seen, the use of UNLESS implies that the certainty of the occurrence of the situation in the consequent clause is greater than with IF...NOT. The speaker is not likely to imply greater certainty of occurrence of something that he or she knows did not occur.