Summary: I believe the tense/aspect system of English verbs is far less complex than many suppose. There is an underlying logic to the system that, when understood, clears away most of the problems that have caused misery to many learners and their teachers. 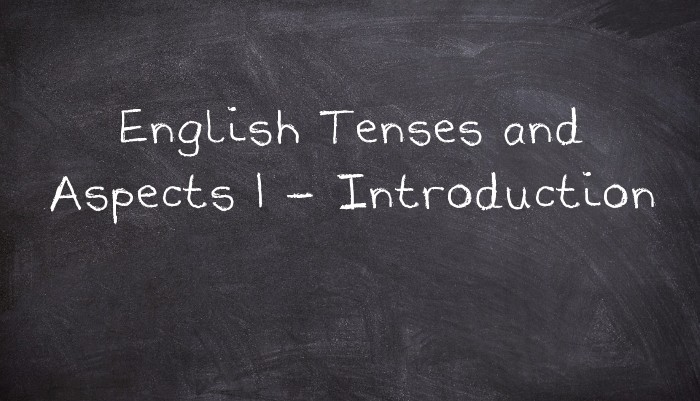 For many people learning English, and indeed for some teachers, the verb system of English seems incredibly complex. Thousands of papers, chapters and whole books have been written on the subject since Bullokar devoted seventeen pages to it in 1586.

I believe the tense/aspect system of English verbs is far less complex than many suppose. There is an underlying logic to the system that, when understood, clears away most of the problems that have caused misery to many learners and their teachers.

This is the first of a series of articles on the English tense/aspect system, one tense/aspect to each article, which will explain the simplicity and logic of the system.

Although many writers in the past wrote of a future tense in Englishiv, if we confine ourselves to the form, then it is clear that English has only two simple (i.e., unmarked by inflection for any other aspect) tenses, as shown in the pairs play/played, work/worked, want/wanted, sing/sang. The first of these forms is traditionally called the present simple, the second past simple. However, as we see below, both tenses can refer to past, present, future, and general time:

Present tense for past time:

1. 1939. 15 March: Germany invades Czechoslovakia. Hitler claims that …
2. Jane tells me you've not been too well since you got back.

3. My stomach hurts.
4. And Gray blocks the ball, passes to McNally on the edge of the box and … it’s a goal!

7. I'm having a drink with Jill after the film.
8. I leave on the eleventh, but I come back overnight, so I’ll be back here on the twelfth.

Past tense for past time:

Past tense for present time:

10. I was wondering if you had a couple of minutes?
11. (Receptionist, to guest in a hotel:) What was the name, please?
12. They would be here with us if they had the time.

Past tense for 'general' time:

Past tense for future time:

15. Her daughter was going to a summer camp tomorrow.
16. If I went back on the train tonight, it'd be cheaper.

Some writers use the word tense for such forms as I am/was working and I have/had worked. Like many others, I refer to these, and to two other forms noted below as aspects. The form shown in I am/was working is traditionally known as the continuous or progressive. I prefer to refer to this as the durative aspect. The form shown in I have/had worked, is traditionally known as the perfect. I call it the retrospective aspect.

I find it useful to think of as aspects: the be going to future, or prospective aspect and the used to past, or habitual aspect.

The two tenses are mutually exclusive; a verb form can be either marked or unmarked, not both. We can combine certain aspects, however, as we shall see in later articles.

In the formulation of my ideas on the English tense and aspect system I have benefited from the works of far too many writers to name. I must, however, mention Michael Lewis’s The English Verb. An Exploration of Structure and Meaning (1986). This is a wonderfully clear analysis of how the English verb system works; I thoroughly recommend to any teacher or would-be teacher of EFL. Those who already know the book will recognize in these articles the debt I owe to Lewis.