Summary: This tense, the traditional 'past simple', sometimes referred to as the preterite, like the unmarked tense, can refer to past, present, future and general time. 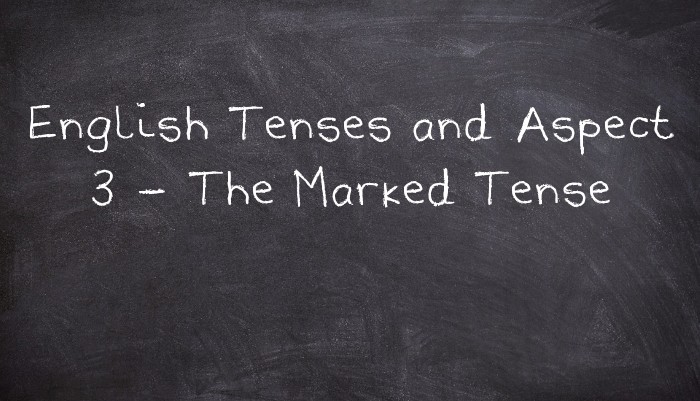 This tense, the traditional ‘past simple’, sometimes referred to as the preterit(e)i, like the unmarked tense, can refer to past, present, future and general time. Typical lists in English grammars of uses of the tense include such uses as:

As with the unmarked tense, it is true that the uses of the marked tense can be described in such ways as those noted, but such descriptions are not very helpful for the learner.

I believe that simple 'rule' that covers all uses of the marked form is:

We use the marked form when we wish to distance the situation - in vividness/time, reality, or directness.

As we saw in an earlier article, it is perfectly normal for a speaker to describe a past situation using the unmarked form:

It is not the tense of the verb that shows us the time but such factors as explicit time markers [8] or the shared knowledge that the situation described occurred in the past [9]. With no context provided, an utterance such as:

10a. We both want kids, but we live in a one room flat in Bootle with her mother, so...

then it is clear that a past-time situation is being described; the speaker has chosen not to distance it in vividness.

What is past, even a few moments ago, is often viewed as past, finished, done with. It is therefore common for speakers/writers to use the marked (distancing) form of the verb to describe past situations, but it is not essential, as we have seen. The speaker/writer has the free choice: to distance or not to distance. One might well consider this as Grammar as Choiceiii. Without explicit or implicit context, the use of the marked tense does not of itself imply past time; and describing past time does not necessarily involve the use of the unmarked tense.

The distribution of present and past tense verbs differs considerably across registersiv. As we might expect, the former is more common in conversation and academic prose, the latter in fiction.

The idea of distancing in reality explains the use of tenses in the so-called first and second conditions:

The speaker is not in Africa, and the children are settled here. The use of the distancing marked form makes this clear. Any attempt to describe this as a special use of a so-called past tense is confusing; it has nothing to do with the past.

Because the unmarked tense does not imply distancing in reality, an utterance such as:

Real and unreal possibilities are examined more closely in later articles. Here I simply note that there is rarely any doubt about the time; if the context does not make it clear, then the speaker will make the time explicit. In an utterance such as

the time may be clear to speaker and listener. If it is not, the speaker will add a time marker such as now, tomorrow, next Tuesday, etc.

Some writersvi claim that the use of could and would in requests is 'more polite' than can and will, as in:

If by 'more polite' we understand 'more diffident, more hesitant, less direct', then this is true. The reason, however, is not simply that some words are more polite than others. It is that could and would are the marked forms of can and will; marked forms distance. Here the distancing is in directnessvii. We see exactly the same use of marked forms for distancing in:

B: I wondered if you had a moment. I wanted to ask you about the meeting.

Some writersviii suggest that, when the reporting verb is in a marked tense, the tenses in the direct speech must be backshifted, as in [22] and [23] except when the words said represent an eternal truth:

This is simply not true. If the situation reported still holds true at the time of the time of reporting, then backshifting is not obligatory. [23a] is perfectly acceptable (if the speaker believes that John is still hungry:

Equally untrue is the belief that non-backshifting for universal truth is obligatory. Non-backshifting is common, but not essential; [25a] is acceptable:

Very often, the use of a backshifted preterite is optionalix. If speakers see in some ways the words uttered as being distanced in time, they are likely to backshift the tenses. If they see no distancing, they do not backshift. It follows, therefore, that if a situation no longer holds true, backshifting is obligatory. We cannot say John said (that) he is hungry if we know that he is no longer hungry,

For some speakers, distancing in reality is a possibility. If speakers believe a reported statement to be true, they do not backshift; if they believe it may be untrue, they backshift:

However, it is not possible to assume that this reality-distancing is intended or will be understood without clear context or co-text such as the bracketed words in [26] and [27]. It is quite possible for such utterances to be made with only (optional) time-distancing, as in:

26a. Mary told me she had a holiday home on Phuket. (I am impressed.)

27a. Mary told me she has a holiday home on Phuket, but I am not sure that she has.)

As is so often the case in English, context sometimes known only to the two parties in a conversation) and co-text are very important in considering why particular tenses/aspects may be appropriate.

It is clear from the examples given in this section that the use of the marked form does not in itself imply reference to past time. As we noted near the beginning of this section:

We use the marked form when we wish to distance the situation in vividness, reality, or directness.

Joos, Martin (1964.121): The unmarked tense will be called actual and the marked one remote. The modern English remote tense has the categorical meaning that the referent (what is specified by the subject-verb partnership) is absent from that part of the real world where the verb is being spoken. [...] remoteness in time in English is always categorically past time. This is one English kind of remoteness. [...] the other kind [is] unreality. The modern English remote tense has exactly the same form, no matter whether the meaning is unreality or past reality.

iii Close (1992. 1-2) presented the idea of Grammar as Choice (for example the selection of a particular tense or aspect for an utterance) as opposed to Grammar of Fact (for example the fact that the plural of CHILD is CHILDREN, not *CHILDS). As Lewis (in Close, 1992.v) pointed out, there are many situations in English where the language user has a choice between two possible 'right' sentences, in the sense of grammatically well-formed, but where each has a slightly different meaning.

I differ from Lewis only in believing that there are often more than two possible 'right' sentences. In these articles, the idea that the speaker chooses one particular verb form rather than any other within each conte