Summary: A look at the form traditionally known as the continuous or progressive 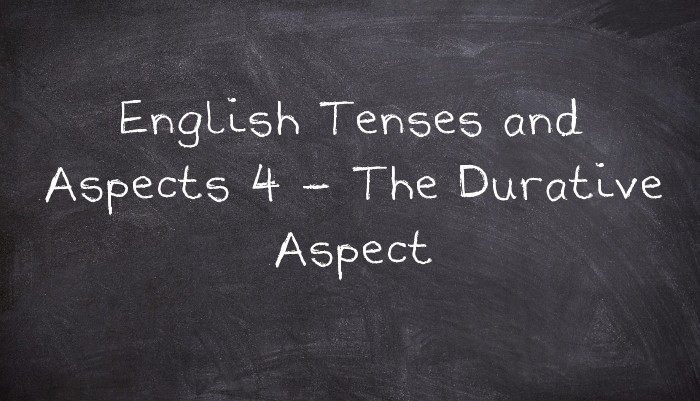 This form, traditionally known as the continuous, or progressive (or expandedii) tense/aspect may be unmarked, I am working, or marked, I was working. It can also be combined with other aspects, as we shall see in later articles. Typical lists in grammars and course books of the uses of the unmarked form include:


Some writersiii have suggested that situations for which this form is used are not necessarily complete. While this is sometimes true, it is not always so, and other tenses/aspects may also suggest incomplete action. It is not a feature that applies always and exclusively to the durative aspect.

As with the tenses, I focus with the aspects on a feature or features that can be found in all uses of them. I agree that "Explanations" which include sometimes are not explanations at alliv. With the durative aspect, we can always note that:

We use the durative aspect when we wish to draw attention to the fact that the situation denoted has duration, and that the duration is limitedv. It is for this reason that I prefer the label durative rather than the less-than-helpful progressive or continuous. Let’s now look again at the five utterances shown above.

However little time is involved, Pete's writing of the letter has duration; it started before the moment of speaking/writing and continues after it. That duration is limited. At some (unspecified) time in the past Pete was not writing the letter, and at some (also unspecified) time in the future that writing will stop. This is why the durative aspect can sometimes denote a situation in progress at the time of speaking/writing, though this is not an essential feature of the use of the aspect.

We may contrast this utterance with:

In which there is no limitation. The speaker's use of the unmarked tense simply presents the situation of Pete's writing letters. From our knowledge of reality we can assume that this situation does not continue for every hour of the day and night, though other situations could, for example:

We may also contrast [1] with:

where the duration of the passing is shorter than the time it takes to talk about it. The speaker's choice of the non-durative (unmarked) form is a choice not to emphasise duration.

The limited duration of the situation is evident from the adverbial this week. Unless uttered by the speaker when s/he is actually en route to work, then the walking is not taking place at the moment of speaking. Even if it is uttered then, the focus is on the limited duration, this week, of the walking method of getting to work, not on the present happening of the action of walking.

Situations such as hopping have very short durations indeed. The use of the durative aspect makes the actualisation of the situation of longer duration. Of necessity, this involves repetitions of the short situation, albeit in a limited time period. In contrast with this, when speakers use the unmarked form,

they place no limitation on the frequency of his hopping.

Situations such as starting and stopping are of even shorter duration - indeed, they have no duration at all. What follows the starting and precedes the stopping has duration: when a train stops, it is moving until a point in time; then it is not moving. The use of the durative aspect extends the duration of the situation to a point before (with stop) or after (with start) that point in time:

……3b. The curtain is going up. The show is starting.
……3c. Get the bags down. The train is stopping.

In [3b], the speaker is in that limited period of time between the beginning of the rise of the curtain and the first word or action of the actors. In [3c], the train has begun the slowing process that will end when its movement has stopped.

In [4], the use of always, normally associated by virtue of its meaning with the unmarked tense seems at first illogical. However, as we have seen with [3] the use of the durative aspect with short actions can stress the repetition of that action. The combination of always and the durative action tells us that this is a situation that actualises repeatedly but, because the duration of the whole series of losing is limited, it is not presented as a permanent state of affairs.

This combination is associated by some writers with some idea of the speaker's emotional attitude, but this will be made explicit not just by the aspect, but by the whole context of situation. It is not true to suggest, as some do, that it always expresses the speaker's irritationvi. It can just as easily express pleasure:

……4a. William is so sweet. He's always buying me flowers and chocolates.


5. Future arrangement: We're meeting in front of the station at seven.

In [5], an arrangement of some sort has been made before the time of speaking. That arrangement continues (i.e., it has duration) from the initial time of making the arrangement to the (future) time of occurrence of the situation arranged. The arrangement could be a personal 'arrangement' the speaker has made with themself.

It is often claimed that dynamic, action or event verbs, which convey the idea of an event, process or occurrence are frequently used in the durative aspect. Such situations have a (frequently unspecified) beginning and end, and therefore have duration, which can be limited. Even for actions that appear to have a very short duration, the durative aspect can be used to convey the idea of repetition. Stative verbs, however, which depict relatively unchanging situations such as perception, possession, emotions, measurements, descriptions, are not normally used in the durative aspect.

It is true that the states denoted by such verbs as BE, HEAR, KNOW, OWN, LOVE, WEIGH, CONTAIN, are not normally referred to as being of limited duration. The beginning and end of them is unimportant or indeterminable. Thus we would not normally expect to encounter:

However two important points need to be noted.

The first is that there are very few exclusively stative verbs. There are many verbs that are often used statively, but can also be used dynamically. For example SMELL can statively mean have an odour [11a] or dynamically get the odour of :

Other so-called stative verbs can also be used dynamically. Thus given the right context [7] [8] and [10] become possible as:

……7a. The sales reps have been allowed to choose their cars for next year Peter is having a new Volkswagen and Mary is having a Ford.

……8a. Richard wanted to finish off the meal with cheese and biscuits, but Gisèle is being French. She's serving the cheese before the dessert.

……10a. Mary is weighing 60 kilos of potatoes for the voyage.

The second important point is that speakers can, if they wish, choose to stress the limited duration of a state and utterances such as [9a] become possible:

……9a. I normally drink only dry wines but this Tokay is tasting good with that rich pudding.

Such uses may be relatively rare but they are completely in line with the simple 'rules' we have learnt about the tenses and aspects so far. The unmarked tense is the default form, and the durative aspect is used when we choose to stress that the situation referred to has duration and that the duration is limited. Presenting lists of verbs that are rarely used in the progressive/continuous as some writers do, is not helpful.

To the 'rule' we established for the unmarked durative aspect, We use the durative aspect when we wish to draw attention to the fact that the situation denoted has duration, and that the duration is limited, we simply add what we already know to be true of simple tenses: We use the marked form when we wish to distance the situation in vividness, reality or directness.

We will now consider some examples of the marked durative.

All three sentences show the aspect being used for the same reason: to express the limited duration of a situation distanced in time. In [12a] the situation began before a stated time, in [12b] before the time of an action. The situation continued up to or beyond that time; context and/or co-text will make this clear as the sentences below show. The actual starting and finishing times of the situation are not stated though real-life knowledge tells us that the situation did start and finish. In [12c] these times are explicitly stated.

While the use of the marked durative can show a longer action 'framing' a shorter one this does not have to be the case: