Summary: It is true that the uses of the unmarked tense can present three major problems for the learner 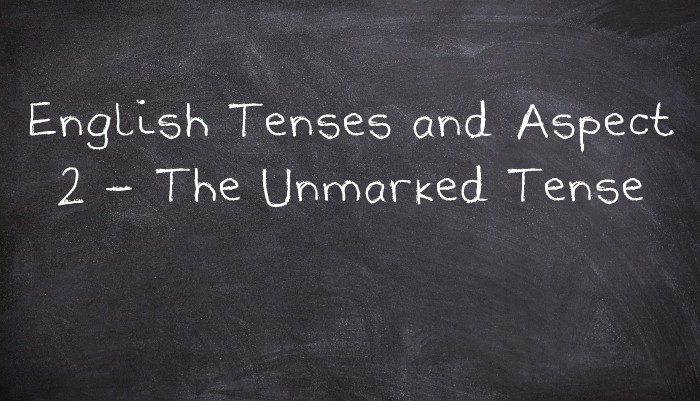 As we saw in the introduction to this series of articles the unmarked tense can refer to past, present, future and general time. English grammars often contain lists of various ways in which this tense (usually referred to as the present simple) are used. Typical lists include such uses as:

However, while it is true that the uses of the unmarked can be described in ways as those noted above, such descriptions present three major problems for the learner:

4a. I am engaging first gear and letting the clutch up.

6a. Then this chap just walked up to me and punched me.

7a. Luke is leaving for Moscow next Wednesday.

7b. Luke is going to leave for Moscow next Wednesday.

7c. Luke will leave for Moscow next Wednesday.

7d. Luke will be leaving for Moscow next Wednesday.

It is no wonder that for many students, the English tense system appears complex.

In fact, there is an underlining simplicity to the system. The only 'rule' for the Unmarked Tense is:

We always use the Unmarked form unless we wish to draw attention to some other aspect of the action/event/process/state.

At first sight this may appear to be evading the problem, but it is not. Instead of thinking of one of the nine or more reasons why learners should use the unmarked tense, they simply use it unless they have a positive wish to express some other ideas (which we shall consider in later articles)ii.

The point can be made clearer by considering two examples:

The difference between these two is clear: in [10], the speaker simply presents the fact of their working in a particular place. In [11], the working is not a fact; something else is important – the speaker's wanting, and the speaker has chosen to make this explicit.

Only in [12] is the speaker's working in Berlin presented as a neutral fact, with no reference to the time, duration, completion or anything else. In [13], [14] and [15], something else is important, and the speaker has chosen to make this explicit. What the something else is will be considered in later articles.

Far from being a present tense in English, this form is in fact timeless; it is not marked for time or anything else. This is why it is referred to in this article as unmarked. Consider again utterances [1] - [9] at the beginning of this chapter. As with [12], the time (past, present, future, general) of the situations is clear from the context; no importance at all is placed on the duration, completion, on-goingness or anything else of the situations; they are presented simply as facts. There is no reason for the speaker to use any other tense/aspect, any more than there is any reason to mention obligation, desire, ability, etc. The unmarked tense is effectively the default tense/aspect. In the articles that follow, we shall consider the addition of other ideas.

i In an informal survey to see how the use of the Present Simple was explained in 16 books, by 15 different writers/groups of writers, I found some 50 different 'uses'. It is not possible to give an exact figure, as some writers appeared to cover in the explanation of one use what other writers would describe as different uses; others grouped similar uses in different ways.

Overall, tensed verb phrases are much more common than verb phrases with modals. About 85% of all finite verb phrases in the LSWE [Longman Spoken and Written English] Corpus are tensed.

In some ways, present tense can be considered the unmarked form, occurring more frequently than past tense, … .

Many verbs occur most of the time in the present tense.

Verb phrases unmarked for aspect are overwhelmingly the most common in all four registers [conversation, fiction, news, academic] (about 90% of all verbs).

“Perfect progressive verb phrases (marked for both aspects, e.g. has been waiting) are rare in all registers, comprising less than 0.5% of all verb phrases.”