The most effective error correction games 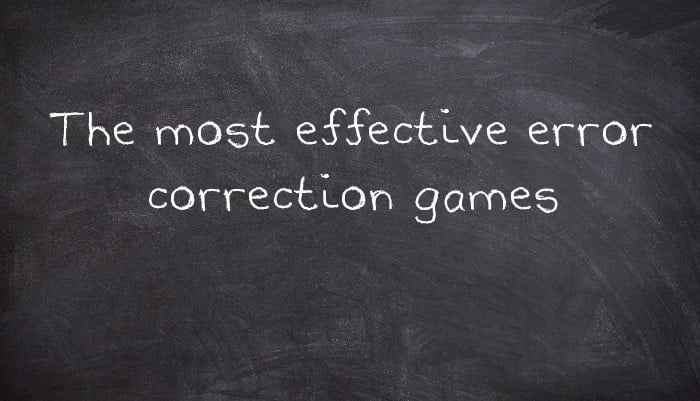 I’d like to start this article on error correction games by saying that I’m generally not a fan of making error correction fun. If your students are bored with error correction, it’s probably a sign that they are getting too much error correction and/ or are failing to see the importance of what they are being corrected on. This is likely to become more of a problem if the teacher comes up with a good game that makes students sit through a few more hours of (possibly pointless) error correction. With all but the least motivated classes, students shouldn’t need fun to be interested in finding out that something they’ve been saying for years isn’t correct, that something could be misunderstood, that something in L1 isn’t directly translatable into English, that a seemingly English word was created elsewhere, or that no one actually says something that their junior high school English teacher taught them.

The problem is that even correction that makes students say “Really? I never knew that. That’s interesting. I really must try and avoid that in the future” is unlikely to be enough on its own to actual stop them making the same mistake again. The emphasis in the games below is therefore on making language more memorable. Thus can be done by making students think carefully about the language before it is corrected and through repeated exposure to common errors. These factors can be increased further by getting students to create example sentences or whole texts and then adding errors to test other groups with, or simply by including several similar errors in one activity.

The activities below are given in approximately the same order as how often I use them. Many of my favourites add more listening and speaking, a weak point of traditional error correction. They are also, as it happens, all quite fun – so make sure you and your students don’t get carried away and go error correction crazy!

Students race to find errors as quickly as possible. I find that this works best with errors sprinkled through whole texts, but students might need some clues such as being told how many errors they should find or that there is one error per line. My favourite version of this is starts with giving out one email with just one error in it for students to search quickly for the (single) error in. Any group guessing wrongly can’t guess again until the next round. In the next round I give them another email, this time with two errors in it. This continues with more and more emails with one extra error each time, usually continuing until email number seven with its seven errors. To make sure that they don’t just correct and forget, with this activity I usually make each email have examples of the same kinds of errors that they saw in the previous emails, plus one more new kind of mistake. For example, I might put a formality problem in the first email; then a formality problem and missing closing greeting in the second email; then a formality problem, missing closing greeting and wrong kind of closing line in the third email; etc.

Pairs of students are given Student A and Student B worksheets with the same sentences but with an error added to one of the two versions each time, e.g. “I have been here three times” on the Student A worksheet and “I have ever been here three times” on the Student B worksheet. The sentences can be given to students either as individual sentences or as part of a continuous text such as a conversation. Perhaps after working with someone with the same worksheet to try and spot where the mistakes are, students are put in Student A and Student B pairs. Without showing their worksheets to each other, pairs of students try to find which bits are different in their two versions, and then decide together if the Student A or Student B version is correct each time. The person who has the version with an error then corrects it to match their partner’s worksheet.

When students think that they have finished, it’s good if you can give them a hint to help them and to make them check again. For example, you could tell students that there should be an equal number of errors on each sheet, making them take another look at it if they “corrected” more sentences on one worksheet than on the other. After they check their answers as a class or with an answer key, you can give them another worksheet with just the wrong sentences to correct, this time being able to see all the sentences but without any help.

Students try to correct a text or collection of sentences and can check at any time if they have corrected it all or not. The teacher just says how many errors are now in the text (including any errors that they have added due to changing something correct to something wrong) and the students try again (and again) until there are no errors left. This activity can be done as a race.

In this simple and lively game, students race to indicate if they think something is an error or not as quickly as possible. The simplest version to explain is to give each student one card that says “Right” and one card that says “Wrong” to race to hold up. However, it’s very difficult to judge correctness from just a single sentence given the numerous possible errors that there are in the English language. Instead, I usually put sentences in pairs and ask students to hold up their “A” or “B” card depending on which sentence they hear they think is right. These pairs can be the same sentence with an error in one version (“A: We need to do some more research” and “B: We need to do some more researches”), two different sentences with the same grammar (“A: There are some problems” and “B: There are some information”) or two completely unconnected sentences. You can also trick them with two sentences which are both correct (in which case they should raise both cards), or both wrong (in which case they should keep both cards down).

Other variations include (running and) slapping the cards (good with young learners) and holding up “Informal” or “Error” cards in response to sentences like “Been busy?” and “How’s going?” With monolingual classes you could also have cards with “Janglish/ Konglish/ Spanglish/ Franglais/ Chinglish” written on one and “English” on the other, or perhaps “Different” on one card (for words which have different meanings in L1 and English) and “Not English” on the other.

Students listen to a list of similar things until they can work out why they are wrong and/or how they should be corrected. For example, if they hear “I wouldn’t trust him. He was in a prison until recently” and “I hated French in the school”, you can give one point for the first person to spot that the article isn’t needed in both sentences.  You could also give another point to anyone who can explain why (in this case that both phrases have special meanings, specifically “He was a prisoner” and “When I was a school pupil”, and so aren’t really talking about the place). This activity takes a lot of preparation but seems to work well – at least until students work out that it isn’t really much of a game! To add more of a game element, you could give out copies of the worksheet and ask them to choose the most difficult category and most difficult examples to test their partner with.

Students listen and try to respond as quickly as possible when they hear something wrong, e.g. raising their hand as soon as they feel like they have heard a grammar mistake. If anyone does that thing when nothing is wrong, they lose a point or can’t take part until the next round. I usually do this with students just listening carefully, but you can also do it as dictation. This can be done with a single text such as an anecdote, or it can also be done with a list of similar phrases or sentences (“some cheese”, “some hats”, “some clothes”, “some cloth”, “some T-shirt”), or with different versions of the same sentence (“There is a lot of news”, “There are a lot of newspapers”, “There are a few newspapers”, “There is a few paper”).

You can also get students to race to react when they hear a spelling mistake. Spell out a list of words, phrases or sentences letter by letter, getting them to race to hold up their hand whenever they think you said something wrong. Before you start spelling you might want to say the whole thing that they will hear, but it is perhaps more fun if you don’t do this so that they also have to work out what is being spelt. The game can be played with students writing down whatever they hear or just listening carefully.

In this very well-known TEFL error correction game, students try to outbid each other for grammatically correct sentences and avoid sentences with errors, with the person who got the best sentences for their money being the winner. This is a nice fun activity, but is incredibly time consuming, doesn’t have much student speaking, and in my experience doesn’t make the corrections particularly memorable (as well as being badly named due to not necessarily being about grammar). Therefore nowadays I literally never play the original version of this game.

To make the language more memorable, the best thing to do is to get students to create correct and wrong sentences to get other teams to bid on (with the teacher double checking that they are correct or wrong as the team intended before using them).

To speed the game up, instead of asking for bids and accepting the highest, you could simply give the sentence to whoever first indicates that they want it, then reveal if it was correct. Alternatively, you could let all teams bid as much as they like on the sentence that comes up, with any team which is correct doubling their money, making it more like betting than bidding. You could also give them the chance to double their money again if they can actually correct the sentence.