Is collocation all it's cracked up to be?

Summary: Collocation is getting a lot of positive press at the moment. 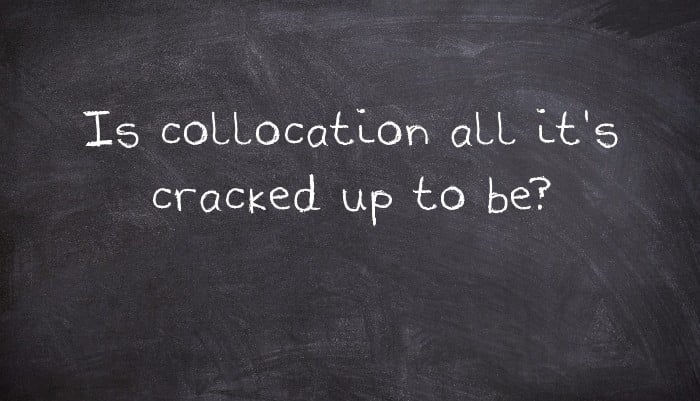 Collocation is getting a lot of positive press at the moment. Most papers on the subject agree that it has been neglected and that it took 'some considerable time before vocabulary managed to establish itself as an area of language study in its own right.' (Paul Meehan - Lonely Word Seeks Like-Minded Partners for Possible Collocation) The Collins Cobuild dictionaries and the research emerging from the project did shed new light on the English language and many methods prior to this had neglected lexis; the Pimsleur Method, recently resurrected all over the Internet, is advertising the benefits of concentrating on grammar words rather than meaning words, a view common in the sixties when the Direct Method and other Behaviourist approaches held sway.

One of the most popular exercise types for dealing with collocation is to have two lists of words in columns and to get students to try to match them up. Brenda Townsend Hall gives an example of one of these, stating that

one point above all seems to be essential in how we deal with vocabulary and that is to raise the learners' awareness of the complexity of the concept of 'meaning' and simultaneously to help them develop successful techniques for dealing with that complexity.

This kind of exercise is very good at raising awareness of the complexities of collocation, but it enabling students to handle it is less well covered. Chi-Chiang Shei and Helen Pain discuss an online program to assist students, though the progress concordancers and corpus based linguistics remains fairly low in terms of student use. Getting students to use Google or other search engines as a basic check is quite an easy way to enable them to check collocations, but it doesn't generate them- it will confirm whether a group of words goes together or not, but it won't tell them without being asked, so it can only be used to confirm.

Some of the claims about collocation are a bit overstated:

This article sees lexical errors as equally significant as grammatical errors and in fact, more disruptive in communication. According to Sonaiya (1988), lexical errors are perceived by native speakers as more serious than all other types of errors because "it is in the choice of words that effective communication is hindered most"

Lexical errors can cause confusion, but that is not exactly the same as collocational errors, most of which will be comprehensible. Claims that 'Lexical chunks bridge the gap between these external and internal worlds by offering us 'prefabricated' lexical items for specific functions ("Brenda Hall) seem a bit excessive. They do offer instant pieces of language, but are only one of many ways of bridging the gap between our internal and external worlds. The case for making collocation so central a part of language learning doesn't take into account the learning aims of many students. It places the native speaker right at the centre, though for many students the aim is not to reach that level, but simply to communicate in a way that they can be understood. In such cases, there is no driving need to combine words in exactly the same way as native speakers.

While a native speaker would achieve an aim, but not a point, would the meaning be lost if a student used the form? One critcism of grammar based methods is that pragmatics suggests that perfection is not necessary. The same could equally apply to collocation. Random lists of arbitrary pairings and groupings do not in themselves constitute the missing link in language teaching. An awareness of the issue, and a knowledge of how checks can be made through dictionaries, internet searches and concordance searches are all very useful tools. Encouraging students to expose themselves as widely as possible to written and oral texts as a way of meeting as many collocations as possible will also help, but I am not fully convinced that the more zealous advocates of collocation are right.