How to Teach English for Engineers

Summary: A short guide to the why, what and how of teaching students studying or working in technical areas. 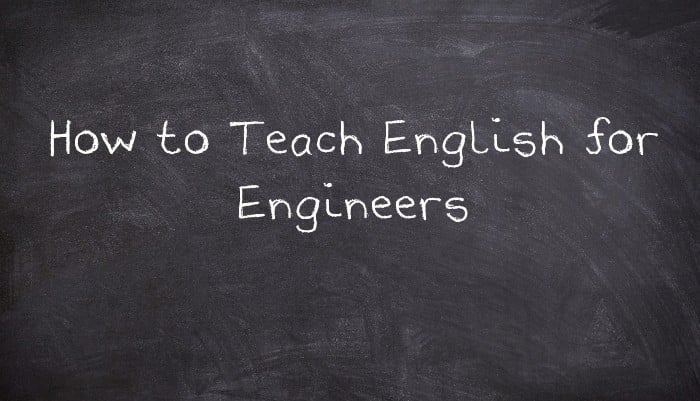 It is rather difficult to decide what English to teach to engineers. First of all, “engineer” has two rather distinct meanings, one of which is close to “technician” or “mechanic” (e.g. a photocopier repair engineer) and another which is closer to “designer”. The needs of these two groups are likely to be different, but there are also people whose jobs and training fall somewhere in the middle. Another complication is that English for Engineers courses are also often for people still in full- time education, meaning no one has any idea which kind of job those people might end up in. Then there are the numerous different kinds of engineer (marine engineer, architectural engineer, genetic engineer, etc) with wildly different fields of work and very specialist vocabulary…

- Consequences/ Cause and effect

- Dimensions, plus other units of measurement like pressures and temperatures and other numbers

- Parts of things, e.g. leg of a chair/ Components and how they are put together

- Presentations, e.g. of a design or to explain an engineering failure

- Things that engineers do, e.g. “check” and “measure”

- Things that machines and devices do and have done to them, e.g. “pivot” and “break down”

- Words which have different general and technical meanings

There will also be some differences between the grammar syllabus of English for engineering and some other ESP courses, for example putting passive tenses earlier in this kind of course, covering the zero conditional long before the first and second conditional, and covering imperatives (pretty much useless for most General English courses). Making uncountable things countable with words like “a piece of…” and “a tube of…” is also likely to be important.

You’ll need to find out which kinds of language from the list above and which specific examples (e.g. which verbs would describe what they do) they need, by finding out more about the students before you meet them, through a needs analysis or by reading up about their industry and job.

There are some great materials available for engineers, including the fabulous textbooks Tech Talk Elementary and Tech Talk Pre-Intermediate, but they generally need a lot of livening up and making more specific to the studies/ jobs of a particular class of students. Both of those things are even more true if your students have a book that is mainly designed for self-study, even if it is a good book like Professional Engineering in Use: Engineering.

Engineering vocabulary can be presented and practised all the usual TEFL ways such as trying to make true sentences about your partner using one or more words on the list, Pictionary, miming, Taboo, and the definitions game. Because suitable things like “spanner” and “spring” can vary a lot (making them difficult to describe, draw etc), you might want to be more specific and give them “bed spring” and “adjustable spanner”.

Of those typical vocabulary games, the Definitions Game (asking students to describe the thing they are thinking of without mentioning any part of its name until their partner guesses what it is) is the most language intensive. You can add practice of other things that they need from the list above to the definitions game by giving them suggested language to describe things with, e.g. shapes, dimensions, materials, adjectives, actions that those things do, and actions that are done to those things. You can also ask them to stick to just one of those categories as long as possible, e.g. using three or four adjectives before they move onto other kinds of description. A version of this that I use a lot is called the Dimensions Guessing Game and consists of the person thinking of an object such as “gear lever” and describing its weight, diameter, length etc until their partner guesses. They could also be given dimensions of actual objects such as an iPad and the world’s biggest cargo ship to read out to their partner until they guess what is being described.

A similar game which combines numbers practice with lots of suitable vocabulary is a Numbers Trivia Guessing Game. One student asks their partner(s) to guess a number that they have on their worksheet, e.g. “How much does the metal in the Eiffel Tower weigh?” They give clues like “much heavier” and “a tiny bit lighter” until their partner guesses the exact amount.

An activity which combines many more categories of vocabulary is a List Dictation. The teacher reads out a list of words until the students guess that the category is 3D shapes, man-made materials, or any of the categories above. They can then label the same categories on a worksheet and test each other in pairs or small groups. It is also possible to score points, with points off for wrong guesses. Perhaps before or after the List Dictation game, students can also be asked to brainstorm vocabulary into categories like those near the top of this article.

Perhaps after brainstorming and/ or a List Dictation, there are also plenty of other activities students can do in which they can use more than one category from the list of useful language above. Possibilities include asking them to combine words:

- As problems, e.g. dangers, and solutions

- Combining two things in unusual ways, e.g. a camera which is also a scanner

- Coming up with new production methods

- Comparisons, e.g. explaining why one thing is better than another, or giving similarities and differences

- Describing a picture combining shapes, positions, components etc for their partner to draw

- Designing something with the functions or properties of two present things, e.g. both drilling and screwing

- Explaining how one thing could replace another

- Giving instructions for use, perhaps including warnings

- Giving reasons for doing something

- In zero or other conditionals

- Plans and how things actually turned out

- The same alternative use of two different objects

Particularly useful activities specific to some of the categories of language given at the top of the article include:

Students give a sales presentation or design an advert for a piece of engineering, imaginary material etc, using as many positive words as they can. The other teams should try to use negative words to describe that thing, with the group who are presenting defending their invention/ product.

Consequences/ Cause and effect

Students take turns blaming each other for a failure or try to think of a good unintended consequence of something bad that their partner accuses them of doing.

Students race to categorise countable and uncountable nouns on scraps of paper (perhaps organised so that there are equal number of each) and/ or decide on how much/ many of those things they will take somewhere, e.g. to set up a polar camp.

Students explain how to do something until their partner guesses what the process or object is, try to add something to their partner’s very detailed description of a process, or do only exactly what they are told to do when operating something, e.g. not moving their hand towards the object unless their partner mentions that.

Students change the shapes of common engineering objects, components or inventions and try to explain why that shape is better than the shapes which are used now – for example designing the world’s first triangular mp3 player.

Students try to find good reasons for why they haven’t done the things that they were supposed to or defend their predictions for future progress when their partner attacks what they say as being unrealistic.

Students race to categorise verbs by their past tense pronunciation and/ or tell an imaginary story of an engineering project/ invention using as many of the verbs as they can.

One student is given a roleplay card with an odd and/ or amusing reason for problems such as “You haven’t plugged it in” or “You are really short-sighted but won’t wear glasses” and the helpdesk person should keep asking questions and suggesting things until they find out that reason.

Students can also be asked to do more creative things with the language, e.g. designing machines using as many of the words that they have been given as they can, automating common everyday tasks like squeezing toothpaste, finding engineering uses for everyday objects, and thinking of low-tech ways to do things like fly to Mars. These kinds of topics can also be tied into reading and listening by finding related texts. There are also plenty of videos that have a connection to engineering or can be given one, e.g. What Did the Victorians Ever Do For Us, National Geographic’s Engineering Connections programmes, parts of the Wallace and Gromit films, the bits where the A Team make things out of random stuff in a barn, and Robot Wars.

Other good topics for speaking, listening and/ or reading (perhaps also with a writing homework) include:

- A Noble Prize for engineering

- Defining engineering, e.g. in contrast to design and science

- Education for engineers, e.g. how practical it should be and how much English is needed nowadays

- Engineering in particular countries, e.g. why the Germans respect engineers more than the British do or famous people and companies from one place

- How respected engineers are, e.g. how high status a job it is

- Inventors who had their ideas rejected by everyone, e.g. Dyson

- Long term space missions, e.g. designing the interior of the spaceship or space station or thinking about amounts of things to take (good for countable and uncountable nouns)

- Moving from engineering to management

- Predictions, e.g. wrong predictions from the past

- Supervision of engineers by non-engineers, e.g. many of the Dilbert cartoons

- The history of engineering