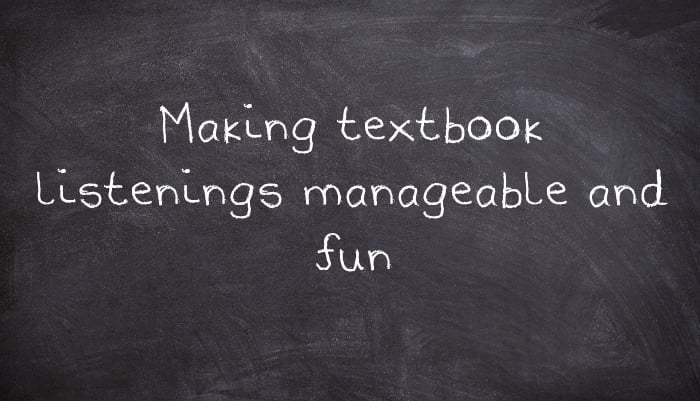 Despite the attempts of some textbooks to use more stimulating listening activities like jigsaw listenings, stories in episodes that end at suspenseful moments, comic dialogues etc, turning on a tape is still the most likely action to make some of your students either sleepy or panicky. As well as adapting drier listening texts to incorporate more fun textbook activities like those just mentioned, there are plenty of things you can do to make a listening text less boring and less difficult for your students. These can be divided into things they do:

A Sense of Anticipation

Any time the students spend anticipating and thinking about what they are going to hear can help them understand when they do finally hear it, for example tasks where they predict what is going to be said and then listen and check. Such pre-listening tasks can also be extended to them doing a whole roleplay or other long speaking task and then listening to a conversation in the same situation on the CD. As words and expressions come up that they need to communicate, these stages can also often be a good natural time to pre-teach things that they will need to understand when they are listening.

Although textbooks usually limit the language they go through before listening to vocabulary (vocabulary pre-teaching), you can pre-teach any knowledge that a native speaker is likely to know and the students not, and will therefore make understanding difficult or impossible. As well as other language stuff like the meaning of grammatical structures they have never come across before or the changes in pronunciation of words in fast natural speech, this can also include cultural knowledge such as place names, personal names, or what the usual replies to certain phrases are or what people usually say in certain settings or situations. When pre-teaching vocabulary, you will also need to make sure you drill and analyze the pronunciation, then maybe get them to use the vocabulary in communication so that they know it properly before they listen.

One minute of help

As well as the general difficulties of listening to a tape with no visual prompts etc, students can also have problems listening to specific texts due to variations in accent, speed of speech, background noise, number of speakers, length of speaking turn etc. This can be dealt with by letting them listen and read a short part at the beginning of the text before they go on and listen to the whole thing.

To make sure they are really listening to that short extract, you will need to give them one easy task to listen for, e.g. "How does the man feel?" This can then lead onto the first easy general understanding task for the first time students listen to the whole text, e.g. "Why does he feel that way?"

One easy question for you

The secret to designing an easy and useful task for the first time students listen all the way through are:

a) Make sure the question(s) can be answered from several different parts of the text, e.g. "Do they mainly agree with each other or mainly disagree with each other?" rather than "Do they agree or disagree at the end?", so that if they miss parts of what is said it doesn\'t stop them doing the task, and so that people who understand the beginning of the text perfectly still have a reason to listen through to the end to check their answer.

b) Have as few questions as possible for them to answer, preferably just one

c) Make sure they understand the question, e.g. by discussing what the answers could be before they listen

d) Do the first task with books closed, to stop them becoming distracted

e) Write the task they need to do up on the board, so they can\'t forget what it is

As well as a single general comprehension task, another easy thing students can do the first time they listen is just to pick out particular language, e.g. "Are the future forms used all ‘going to\' or all ‘will\'?" or "Count how many times they say ‘we\'"

Students can also be given time to prepare for a listening before the class, e.g. being given the list of pre-teach vocabulary to learn or write the phonemic symbols for, writing out a dialogue similar to the one they are going to hear, or being told to listen to a previous textbook task again or something available on the internet because it is similar to what they are going to listen to in class next week.

One way of simplifying the listening and make it more fun is to give the students a simpler and more active way of responding rather than just scribbling down answers, e.g. responding physically by sticking up their hand as soon as they hear something the class had predicted, slapping a card with the answer written on it, holding up a question mark if they hear a question, making the facial expression of the feeling of the person they are listening to etc. At a later stage, students could also act out (mime) the dialogue as they listen to it. Giving the students control of the stereo can also have the same effect of waking them up and getting them involved.

Slow down and let me think

Some cassette recorders have a speed control that you can use to slow down the speech a little, either when students listen to the whole text a second or third time or just for a short section that they are not catching.

If you don\'t have this speed function, pausing the tape can also help- even when you are not asking them to do anything special in that time but just letting them think. One time that it is well worth pausing the tape is after the first of a list of comprehension questions is answered on the tape, to make sure everyone understands the task and has not lost concentration during the introductionary part of the listening.

As well as any grammar or vocabulary work in the book that the listening leads onto, to make sure the students find listening to a similar text the next time you will need to spend some time making sure they analyze their difficulties and practice the language that comes up.

Especially with listenings that students found difficult but will need to be able to understand (e.g. exam listenings for IELTS or TOEIC students, lectures for students who are going to study abroad) it is worth asking students why they found it difficult and giving them some self-study tips on where to find English language listening sources of the right type and level, and what to do when they are listening to them. This can then prepare the students for any further language work you do in class.

Ways of analyzing a listening text include writing the sounds you are focusing on (e.g. schwa for unstressed grammar words) in phonemic symbols on the tapescript as you listen, drawing loops between words when the sounds are linked together, putting brackets around sounds that are not pronounced or are hardly pronounced, and marking the sentence stresses or word stresses.

You will then want to make sure the students remember the pronunciation, grammar, vocabulary and functional language points in the listening. Although it is worth mainly concentrating on language they will actually need to produce, some drilling of linking sounds, for example, can be worthwhile if it will help them understand fast natural speech next time.

Practice activities that are interactive and fun include students testing each other\'s memory of the text, either the facts or elements of language such as the prepositions. If it is a dialogue, they can also read out the dialogue in pairs then cover it up line by line from the bottom and practice until it is all remembered. To make sure they use the right rhythm while they do pairwork tasks like this, you can first do shadow reading, where half of the class take each part and speak along exactly in time with the cassette, finishing with the cassette fading out and back in again to see if they have remained in time. Students can then be given roleplay cards to improvise similar conversations in pairs.

While most of the tasks above are useable with all kinds of listenings, before choosing which one you will need to analyze the text and the tasks in your textbook and decide what the students are likely to find difficult. One way of analyzing this is to first think about what problems students might have if they read the text, and then think about what problems will be added when they listen to it. Tasks like those above can then be used to limit and deal with those difficulties as they come up- as well as, of course, making the class fun!