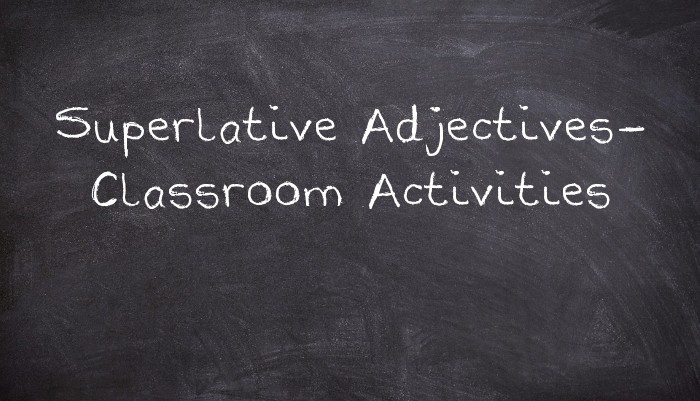 There is much to be said for presenting comparative and superlative forms together, as I’ve recommended in an article on topic on this site. However, some classes can benefit from a lesson or two on just superlative forms. This allows the teacher to split the topic of comparing into two or three more manageable bits. That also allows for revision of the topic after a pause to let students get their subconscious around a topic (or perhaps revision after they have started to forget!) It also leaves time in the lesson and mental space for useful collocations with superlatives like “the second”, “… by far”, “…by a substantial margin”, “… but not by much”, and related forms like “the least…” This article gives a range of practice activities that allow students to concentrate on just superlative forms without the distraction of “…er” and “more…”

The usual way of drilling superlatives is with the comparative form in strings like “large larger the largest” and “interesting more interesting the most interesting”, so this is dealt with in the article on teaching both of these forms. However, it is also possible and useful to drill opposites like “the biggest”/ “the smallest” and “the most interesting”/ “the most boring”, and in fact drilling this way tests students’ understanding of the meanings of the adjectives more than the normal “tall taller tallest” drilling format.

Work on superlative opposites can be done with normal drilling games such as Opposites Tennis, in which student test each other by “serving” with superlatives and “returning” with opposites. This can be played with the rules of volleyball, tennis, badminton or ping pong, perhaps with an actual ball. Stacking blocks as they drill “angriest”/ “calmest”, “widest”/ “narrowest” can also be fun. You can also use more complex games like the one below.

Prepare at least 15 cards with superlatives with opposite meanings on the two sides of each card, e.g. “the longest/ the tallest” on one side of a card and “the shortest” on the other side. Ask students to spread the cards across the table, either side up. One student tries to guess what is on the opposite side of the cards, turning them over to check and stopping whenever they make a mistake. The next person then does the same. They can try the same cards as they just saw someone else guess, new cards which haven’t been tried yet, or (probably) a mixture of the two. Cards which have been guessed correctly stay turned over, so the next person has to do the transformation the other way round.

There are many possible ways of organising the game and deciding on the winner, but my favourite is just for the person with the longest string of correct guesses during the game being the winner. (Please Google “grammar reversi” for other possible rules).

Students make personal sentences with superlative adjectives like “My feet are the second longest in my family” and “My father is the hairiest person I have ever met”. The other people guess if the sentences are true or false, perhaps after asking for more details with questions like “Which parts of his body are especially hairy?” To make for a good range of language and a good mix of true and false sentences, I would probably play this with a pack of cards with superlative adjectives, collocations like “by far” and topics. Each person chooses one card at random and makes a true statement with those words or on those topics if they can quickly think of something, or just use their imaginations if nothing true comes to mind.

You can also play more complex bluffing games such as students writing two true and one false superlative sentence and true and false replies to questions. My favourite version of the latter is You Must Say Yes, in which students must answer all questions like “Are your feet the smelliest in your family?” and “Is your homework the messiest in this class?” with “Yes”, even if that isn’t true. The other students guess if that “Yes” answer is true, probably after asking follow-up questions like “What does your mother say about your feet?”

Make a list of problems and/ or things people might want to achieve with superlatives like “I’m the lowest level student in my class” and “We want to be by far the best employer in our industry within five years”. Students discuss what should be done to solve those problems and/ or achieve those things. After the speaking activity, you can then test students on the superlative forms and/ or collocations with superlative forms that they just saw in the prompt sentences.

Tell students you will give points for “The highest jump”, “The quickest alphabet song”, “The quietest tiptoeing”, etc. This can be done with several students doing it and the rest of the class judging which attempt was actually “The stillest standing on one foot”, etc. Alternatively, you can let students volunteer to try and outdo everyone else, with five points if their attempt is the most extreme but minus one point if someone else beats them (and all students who don’t try getting no points).

The challenging students games above works even better with a pen or pencil. Challenge students to draw “The scariest monster”, “The straightest line (without a ruler)”, “The faintest pencil line (without disappearing)”, “The most beautiful princess”, etc. Then get one or more students to use the same language to choose the best, and perhaps also write “The cutest panda” etc next to the winning picture.

Give students a list of vocabulary that you want to present, practise or revise such as words from the last three textbook readings or describing towns vocabulary like “amusement arcade” and “pharmacy”. Students take turns making sentences with superlatives about words which are on the list. They can cross that word off and score one point if their partner agrees that it is really “The most difficult to pronounce”, “The most useful for businessmen”, “The hardest to translate into French”, “The most important place in an emergency”, etc of all the words which are left on the list.

In threes or fours, two students each think of one (real or imaginary) choice of the best place for lunch in London, the best role model for teenage girls, or the best holiday resort for a honeymoon. Those two students take turns describing how good their thing is with phrases like “My choice has the politest staff” and “Mine has the most romantic lighting”. You can let students also contradict their partner’s descriptions with phrases like “Yours does sound polite, but actually I think mine has the politest staff, because they always bow when you arrive and leave”. However, for more of a range of language you could tell them that each phrase should have a different adjective, e.g. “Yours does sound polite, but mine is by far the cosiest because each table is in a little private alcove”. Whenever both students have run out of ideas, the other student(s) in their group decide which one sounds the best from those descriptions (ignoring anything else they happen to know about that thing that wasn’t mentioned).

To practise opinions language like “I really think that…” and “I totally agree”, students can discuss questions like “What is the worst thing about living in this town?”, discuss and modify statements like “The biggest economic problem in this country is (lack of/ low/ high) inflation”, or try to make statements they all agree with on topics like “the environment” and/ or using words like “most realistic”.

Ask students to talk for at least one minute on “The worst job”, “The biggest social problem in this country”, etc. This will probably naturally produce at least some superlatives during the speaking, but you could also go onto test them on the forms that they just saw with gapped sentences like “The _______ (bad) job”.

Although most also include comparative adjectives, there are a few picture books with plenty of this grammatical structure such as the book “Things that are Most in the World” by Judy Barrett. You can also make up or ask students to invent stories using this grammar, perhaps with repeated structures like “He’s got the most stylish jacket and the worst haircut. He cooks the most delicious breakfasts and the most disgusting dinners… Will anyone marry this prince?” For more of an actual story, you could have the plot of people swapping position such as the richest man becoming the poorest man and vice versa.

The LearnEnglishKids site includes a nice song called Record Breakers with lots of superlative adjectives which can be mimed along to, and it should be easy to make up your own TPR song with actions like “The fattest cat” and “The tallest tower”.

Students research and then test each other on “the longest river in Europe”, “the heaviest bridge in the world”, etc. If they are asking the other students to guess the subject of each sentence (“_________ is the deepest sea in the world” etc) then they will be probably need to give them options, e.g. three buildings which could have been the tallest in the 20th century. However, much more language is produced by students giving each other sentences which include the subject but not the adjective, with the other students trying to work out what the superlative and/ or collocations like “second” are in “Mont Blanc is the ________________ in the Alps”.

Students work in groups of three and four and share information to make sentences like “Hao is busiest on Thursdays” and “Nancy goes to bed latest”. If you want to make the activity competitive within the group, you can give points for each time that a particular student is the subject of a sentence, perhaps with bonus points for also using collocations with the superlative (e.g. two points for Steve if he finds that “Steve has the longest fingers, but not by much”). If you want to make the game competitive between groups, give points for each true sentence that other groups didn’t also make.

The same thing can also be done with points for true statements, e.g. one point if they guess that “Your brother is louder than your sister” and it is true.

Superlatives in the classroom

Students get points for making true statements comparing things and/ or people in the class that no one else has said yet, e.g. one point for “My desk is the wobbliest in the class”. If you want to encourage more of a range of language, you could give double points for also using collocations such as “by far” and/or forbid using the same adjective twice.

Sentences with superlatives like “This could be _____________________(important) information you learn this year” are a great way of presenting different kinds of presentation hooks such as amazing statistics, quotes, rhetorical questions, and personal anecdotes. Perhaps after a simple gapfill task, students classify the hooks as “survey questions”, “provocative statements”, etc. They then can write their own examples of each category of hook, although I wouldn’t force them to use superlatives at this stage.