Summary: How to start the new school year when teaching very young learners 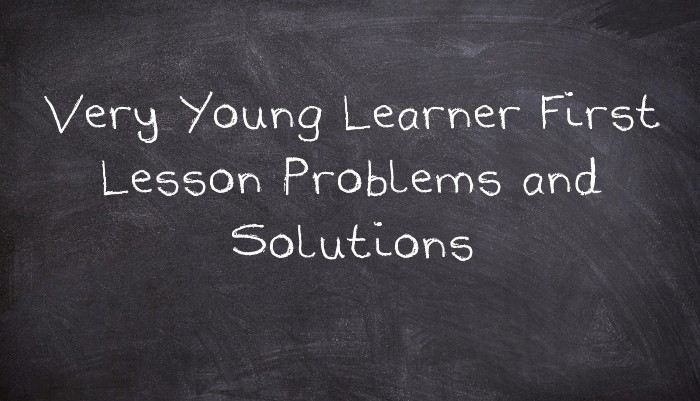 The first thing to do is to find out which activities they are likely to know, e.g. games that are popular in that country or things they do in their standard kindergarten classes. Other activities you use should be explainable just with actions and be very simple. For example, rather than doing Simon Says just do mimes, maybe including shouting “Stop!” to freeze them every once in a while to make it more fun.

Some crying is almost inevitable, usually because there are unfamiliar people there but maybe because:

or other things completely unrelated to your lesson like hunger or sleepiness.

The unfamiliar faces thing can be partially solved by allowing parents and other staff to stay in or near the door for the first couple of lessons, or by distracting them from people’s presence with something like a puppet, book, toy or song. Keeping activities very simple as suggested above stops tears due to confusion, and the other things can be completely avoided by careful planning to avoid those situations, e.g. no activities asking them to share and no using points in the first few classes. There will still probably be tears though! It is usually best to leave any crying kids to it after a few sympathetic words and gestures, but there be cultural, school or parental expectations of different reactions. If the tears get worse you could call in someone else to help, speak to them in L1, give them something to distract them, or introduce a sudden change in classroom activity to hopefully make them forget about their troubles.

Refusing to come into class

As with crying, it is often best to leave them to get over it in their own time. You can try to tempt them into the classroom in two contrasting ways – by doing something that takes over the whole classroom like running around in circles so they can easily be drawn into it and slip into the activity, or by doing something interesting in another part of the room that they can’t quite see or hear from where they are so they are drawn towards it. Some individual attention such as taking their hand to lead them in can sometimes help, and is worth repeating every once in a while as long as it doesn’t make them more nervous or shy.

The best solution to this is just to assume that about 50% of the class won’t be doing what you want them to at any one time and plan activities that work anyway. For example, plan to give blocks to every student starting with the ones that shout out the right answers but then moving onto others, including people who won’t even take the block by leaving it next to them.

It might seem bizarre that a class of three year olds can already have mixed levels, but ambitious parents and Playtime Disney means this is often the case. In these globalized times, you may also find that some of your students are bilingual or even know more English than they do the local language.

As suggested above for different reasons, avoiding teams, points and clear winners can help you combat one possible negative consequence of mixed levels. You should also plan to do activities where the students can respond in several ways, e.g. by shouting out the word once they see the picture, by shouting out the word you say and/ or by copying a mime you show them to represent the word. As many activities as possible should also be open ended, e.g. counting activities that start at “One” and can stop any time that they have heard a new number or two, flashcard activities that don’t require getting through the whole set, and picture books that you can skip pages of or change the order of. As is usually a good idea in very young learner classes anyway, dealing with mixed levels will also involve planning to cover a little bit of many different language points (e.g. one or two new animals, fruit, actions, numbers, colours and simple personal questions) rather than basing the whole lesson around one topic or language point.

You don’t know what they like and dislike yet

As well as doing lots of different language points as suggested above, your lesson plan should make it possible to abandon any activity as soon as it is obvious it isn’t working. This means that activities should stand alone rather than rely on the input from a previous activity to make them possible. Very young learners anyway rarely notice or appreciate clever links between different parts of the lesson and quick changes in activity, pace and content are likely to have more impact.

The good news is that something not going down well in the first class doesn’t necessarily mean that you can’t try again in a future lesson. However, the fact that new things rarely work well obviously makes for problems planning the first class. As mentioned above, it is usually possible to find out what things they are already familiar with, and things that are so simple that they hardly count as activities such as jumping around the room shouting “Jump jump jump” are almost always fun (for both those taking part and those sitting down watching). This is also yet another reason for having activities that are easily abandoned and lots of options on your lesson plan.

In the same class that some students are too shy to take part or even crying in, others (or even the same children a few minutes later) may be hanging on to the teacher’s leg, pushing the other children out of the way to take part, shouting out every word, running around while others are slowly walking or sitting down, and crying when the class finishes. The over-excitement could be caused by having more lively activities than their usual classes, by the novelty of speaking English, by finding the presence of a foreigner and/ or man hilarious, or by finding that the English they have learnt elsewhere does actually have a function. A bit of high spirits isn’t a problem if it doesn’t lead to bad behaviour or stop the other students having a fair chance to take part, but there are techniques for when it does become an issue. One is to plan cooler activities (the opposite of warmers) such as reading a book and doing mimes that can be used at any time during the lesson. The other is to think about some mild and easy to demonstrate punishments just in case things get out of hand.

They might not have learnt some social skills yet

In the most extreme cases an English class is sometimes the first time that a child has mixed with lots of other children of the same age, at least in a classroom setting. This means that they might be at least as freaked out by the other children as they are by the teacher or being without their parents! They might also not have social skills such as working together, taking turns, sharing and accepting an equal share – and in fact children under around four are unlikely to have these skills fully developed however long they have been trained to do so. Training in such skills (e.g. passing games and asking them to work in teams) can wait for future classes, so in the first class it is best not to rely on any of those things for the activity to work.

As I said above about activities that don’t work the first time you use them, new very young learner classes that don’t go well can often be completely different once they have got used to you, each other, being in a classroom and/ or the activities you ask them to do. First impressions also aren’t as important with this age range as they are with older students, and classes that start slowly or chaotically can often turn out to be the best ones by the end of the term or year.