How to teach consonant clusters to EFL learners

Summary: How to present and practise consonant blends, with consonant cluster games 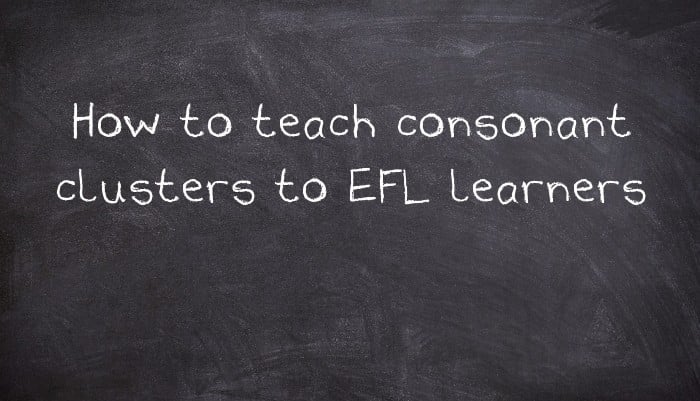 When it comes to tricky pronunciation points in English, perhaps the most practice is available for difficult sounds like the two pronunciations of “th” and close minimal pairs like “hat” and “hut”. However, for my students both the trickiest pronunciation point and the one that is most likely to lead to communication problems is consonant clusters like the “str” and “ngs” in “strings”. This article gives tips on how to present and practise this point until students can at least hear such groups of consonants clearly and pronounce them understandably, including some fun consonant cluster games.

Some nationalities have more general problems with English pronunciation that also manifest in consonant clusters in English such as adding another vowel before “s” (“I’m from Espain”, etc) and not being able to pronounce the component parts of the consonant cluster (pronouncing “three” as “tree” or “sree”, etc). However, the most common problem worldwide is probably adding extra vowels between the consonants. For example, the Japanese use the English word “strike” in their own language, but in Japanese it has four syllables and so can be pronounced something like “sutoraiku”. This is understandable because in Japanese all consonants except a final “-n” have an accompanying vowel and so no initial consonant clusters are possible. Perhaps more surprisingly, some of those Japanese speakers have problems recognising that they are only hearing one syllable when an English speaker says “strike”, and this is true for many other nationalities too. To make that even trickier, English also has consonant clusters where vowels are written in between the consonants but are not pronounced, as can be seen in past verbs like “passed”.

The opposite problem is swallowing sounds. For example, when my Thai students tried to say “Macdonald’s”, it took me ages to understand what they were saying, and when I finally did it still sounded more like “Macdonal” to me. As with this example, swallowing sounds seems to be most common with final consonant clusters. Although native speakers also do this to some extent, there is usually at least a little residual part of or effect of the sound, so that a native speaker’s pronunciation of “kids” doesn’t quite sound like “kiz”, and “eighths” is slightly different from “ace”.

What students need to know about consonant clusters

One of the problems Japanese students have with recognising that “strike” is one syllable in English is that Japanese doesn’t have the same concept of what a syllable is, and the same is true for other languages. There are also many students who have never studied the concept of syllables even in their own language. This means that the first thing that most students need to know in order to recognise and then pronounce consonant clusters is a definition of a syllable. In English, one syllable basically means one vowel sound, with long vowel sounds like “or” and diphthongs like “ai” and “O” also counting as one vowel sound and so one syllable. For example, “cried” only has the vowel sound “ai”, and so is a one-syllable word. There is another whole article on teaching English syllables on this site.

How to present consonant clusters

Once students can intellectually understand that “streets” is just one syllable, the next two steps are getting them to recognise that without too much thinking time and getting them to pronounce it themselves. These can be done in either order, but I’d probably work on them saying the consonant clusters first.

The vowel sound which defines a syllable is also the key to pronouncing consonant clusters. The easiest way for students to do so is to start with the vowel sound and then slowly build on it by adding sounds before and/ or after. For example, if students have problems pronouncing “strength”, it’s best to practise it as:

It’s best to present this technique for the first time with words which have just one consonant cluster before or after (not both), and preferably ones which build on words which they already know like:

While you are presenting and practising consonant clusters this way, you can make sure that students still concentrate on the number of syllables by beating them out with your hand and maybe getting students to do the same.

Before or after they try to produce consonant clusters that way, students should also do some work on quickly recognising how many syllables they can hear such as the simplest responses games in the practice section below.

For consonant clusters which are written with a letter between the consonants like “banned” and “called”, the best way of showing the pronunciation is with a homophone like “band” or writing it how is pronounced, as in “calld” or “cald”.

How to practise consonant clusters

Along with just some trying to pronounce them differently, these could be put into games below such as the simplest responses game.

Students listen to two words and hold up a card saying “The same” or a card saying “Different” depending on what they think about the number of syllables. For example, if they hear “peer” and “spear”, they should hold up the “The same” card, as they both have one syllable. However, if they hear “rap” and “rapid”, they should hold up the “Different” card. After labelling the same pairs with “S” for the same and “D” for different on a worksheet, they can practise saying them with the right number of syllables while reading them out to test each other with the same holding up cards game. If you then give them a list of just one of each “the same” pair, they can also be tested on their memory of the versions of each word which have consonant clusters.

It’s more difficult to find examples, but it’s also possible to do the same thing with homophones and minimal pairs and other confusions like those given above, with “The same” actually meaning the same pronunciation (not just the same number of syllables).

If you give students cards saying “one syllable” and “two syllables”, students can also be tested on their understanding of single words like “spaced” (one syllable) and “torrid” (two syllables). After labelling the same words on a worksheet with “1” and “2”, they can then get some more practice as they play the same holding up cards game.

Give students some short words which can have two or more other consonants added before and/ or after to make other words, including words like “pan” (to be extended to make “span”, “pant”, “pants”, etc). Students take turns adding consonants before and/ or after while keeping the number of syllables the same when they pronounce it, stopping when someone pronounces the next version with more syllables or can’t think of any more consonants to add.

It’s probably best to allow nonsense words like “spanch” in this game as long as they sound like English and follow the rules. However, if you want to stick to real English words, you could get students to type their longer and longer words into something that will spellcheck for them such as Microsoft Word, allowing them to make spelling changes as long as the sounds of the shorter version don’t change. Alternatively, you could also play as a whole class so the teacher can check each word, perhaps with the Consonant Clusters Word Building Race game below before or after.

Put up a short word which can have consonant sounds added before and/ or after to make a word with the same number of syllables such as “rope” for “ropes”, “roped”, “trope” and “tropes”. The first team to put their hand up gets a point if they can successfully spell and pronounce an English word that has an extra consonant sound before or after, but they lose a point if they raise their hand but can’t think of anything, it isn’t an English word, they spell it wrongly, or they pronounce it with too many syllables. Note that this game is about added sounds, so changing the spelling is fine as long as they don’t change any of the sounds of the original word.

To encourage more and more complex consonant clusters, you can give two or more points for changes like “ran” to “trans” and/ or allow other teams to outbid the first team by coming up with options with more added consonant sounds.

Give students example sentences, names of movies, songs, etc which have been made wrong due to something to do with consonant clusters and ask them to correct them. This is most amusing if they simply have missing sounds to put back in as in “A Treat Car Named Desire” for “A Streetcar Named Desire”. For titles of movies, songs, books, etc, it’s best if students are likely to know the real title and the correct title makes sense but the wrong version doesn’t (unlike A Streetcar Named Desire!) Unless the thing is really famous, it’s best to avoid one-word examples. Funny mistakes include:

Pelmanism and snap are a slow game and fast game respectively in which students try to spot cards which are similar in some way such as the words on two cards having the same number of syllables. Looking for the number of syllables works better than the match being the same consonant clusters, as things like “pl” are too easy to see and so don’t teach the students anything.

Make a pack of cards with about half of the cards having one syllable words and the other cards having words with two or more syllables. For pelmanism, students spread the cards over the table face down and take turns trying to find a matching pair. In snap, they deal out the cards but don’t look at them, take turns putting their top card face up on the table, and race to shout “Snap” if the last two cards match. The two games can be played with exactly the same pack of cards.

This is also a matching by number of syllables game. Make a medium-sized table, say ten by ten, and put a word in each square so that there is an unbroken line of words with the same number of syllables from the top left square to the bottom right square and that all the other squares have words with more syllables or fewer syllables. Students plot a way through the maze by moving onto the squares which have the same number of syllables as the top left square, avoiding ones which seem similar but aren’t the same. For example, if the top left square has the word one-syllable word “pleased", the students should look below and to the right for the word “stressed”, avoiding the words longer words “needed” and “super”. They then move onto “planned”, “rights”, etc until they reach “aren’t” in the bottom right square.