Summary: Interesting activities and topics about prehistory and ancient history for ESL classes 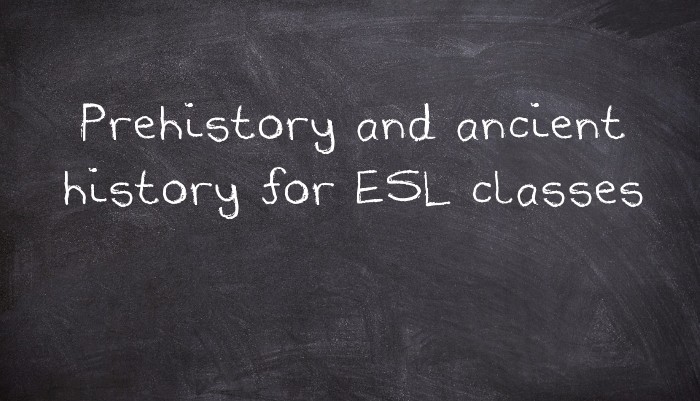 What on earth came out of the earth?

Students speculate on what archaeological finds they are given photos of were or were for, perhaps using past modals of probability and possibility

Students read texts about how to spot archaeological fakes and then choose the photos of the ones they think are real and bid for them. The team that bought the most valuable real antiques for the most money are the winners

Students read a description of an archaeological dig and try to identify the place as accurately as they can on a map (probably with some guesswork involved). The team who are closest to the exact spot win

Drawing into the past

Students read a description of where a now disappeared Ancient Roman building, e.g. the old city walls of London, was and try to draw it on a modern map. The class that are closest to the real outline win. This can also be done as a treasure hunt outside or in the school building, with an imaginary buried structure if there isn't a real one.

Ruined but not forgotten

Students are given a picture of a Greek or Roman ruin as it now stands and a description of how it used to look and have to draw the missing part. They can then look at an artist's impression or computer reconstruction and check. Something similar can be done with adding the colours to a now pure stone sculpture or building.

Not as Neanderthal as you'd think!

Students try to make comparative sentences about Neanderthals and modern humans and then read or listen and check. There are some nice surprises for them in this, such as Neanderthals' bigger brains!

I guess we're in Greece

Students guess which list of vocabulary links to which ancient or prehistoric period, e.g. javelin, Marathon and Sparta for Ancient Greece. This can be done as a word by word dictation, with the most obscure or not clearly tied to one period words first and students guessing as soon as they are sure but losing points if their guesses are wrong.

Students try to spot the vocabulary or descriptions of technology that don't match the period, e.g. toilets with flowing water, baths and central heating are okay for Ancient Rome but cannons aren't

Students mime an ability or lack of ability of Neanderthals and their team try to guess what they are miming, e.g. walking or not speaking (maybe by having their mouth tightly closed or making a cross in front of their mouths with their hands)

Students put pictures of the ancestors of modern humans in chronological order, then the teacher explains what is wrong, using sentences like "The third person's head should be bigger"

Bringing cavemen up to date

Using a computer graphics programme, students change a picture of a very distant ancestor of humans to a more recent one with information from a written or spoken comparison

Still cavemen after all these years

Love through the ages

Cut pictures of people from different ages and places so that each piece is a horizontal slice of a person, e.g. just their legs or just their head and shoulders. Give each student one piece and they have to go around describing that they have and asking questions until they have found all the other bits of their picture.

What would the Romans ever do for us?

Peace in our ancient time

One student is a Roman official and the other student is a representative of a warlike people on their border such as the Germans or the Picts. They have to negotiate a peace contract and then write it up in an official looking way.

How human are humans?

Students try to think of replacements for people being killed in public in gladiator fights and Christians being thrown to the lions, and then roleplay trying to convince the Roman Emperor that it is a good idea

Other topics that could be interesting for students: