Summary: Activities for history projects in the ESL classroom 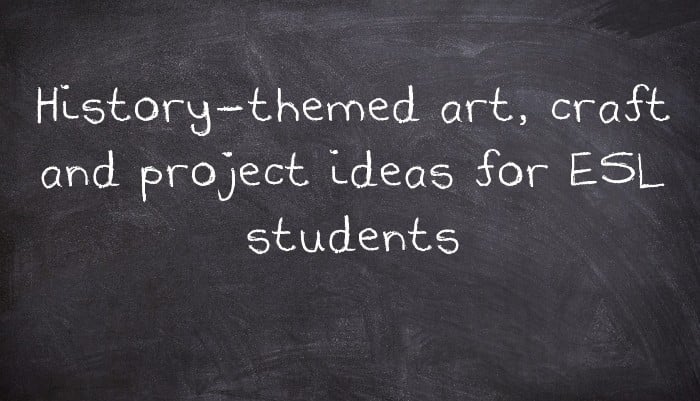 Students make a grave for a plastic or cut out figure in a sandpit with a large stone and several smaller ones. If there is no sand on the buried figure when they open it up again, then their grave is a success. You can also get them to decide what grave goods to put in there and then make them or cut them out from a magazine, catalogue or photocopiable worksheet. You can add language to this task by giving them written instructions on how to make the grave and getting them to ask you for the grave objects they want to put in it. Alternatively, one person can be given pictures of what needs doing and they have to describe it to their partner without showing them the pictures.

Students make a compass with a needle and cork floating on water from written or spoken instructions. They can then use these for tasks such as a written treasure hunt you have prepared.

Students make a Roman arch from wooden blocks by building it around a bowl and then sliding the bowl out and leaving it standing, or by making it lying down on a piece of card and then slowly bringing the piece of card vertical. Different groups could try the two different techniques and then explain their technique to another group (maybe as a jigsaw listening or reading), or students could read or listen to the two techniques and choose to try just one. Alternatively, the two techniques could be given as mixed up readings

Students plan a Roman herb garden, researching what herbs were used (or just doing a listening or reading and selecting from the seeds that are available) and then planting the seeds. They can then write about how the plants are growing and about the taste of the herbs and how they used them in food. You can add language by describing the seeds they must select and extra crafts by getting them to make labels for each section of the garden with pictures of the herbs that will grow there.

From a written or spoken description concentrating on the shapes and colours of the leaves, students draw a Roman herb garden.

Students make Greek and Roman statues from Playdoh, Blutack or clay from written or spoken instructions (e.g. "She doesn't have any arms" for the Venus di Milo), then compare with the original.

Put cut out body parts from pictures of different statues on the board or the floor. Students explain which parts they want and then stick them together to make their own statues. Give prizes for the craziest, most beautiful, best matching, scariest etc.

This is similar to the activity above. Students tell the teacher which body parts they want (e.g. "Can we have the unicorn's horn, please?" or "We want the legs at the bottom left"). They then make a collage monster from them, and you can give prizes for the scariest, cutest, most like a "real" monster etc.

From written or spoken instructions, students make a toga from a sheet and/ or Roman army sandals from flip flops and ribbon. To make it easier, you can get them to put pictures in order while reading or listening, and then try it out to confirm if they have put them in the right order. Alternatively, you can give the texts about the sandals and toga mixed up, then students split up the texts, put them in order, and then try to make the clothes. It is also possible to make the toga for a teddy bear or a cut out cardboard figure if you use a small piece of sheet.

Students choose which objects they want buried with them and then draw them on a picture of the inside of a pyramid etc. You can then discuss which of those things weren't available at that time (but let them keep those things in their pictures).

Students can easily make a spindle (part of making traditional homemade cloth) with a potato and a pencil. Instructions for this are available on the internet.

Students read or listen to a description of the differences between Gothic cathedrals and Romanesque cathedrals (e.g. "The windows became taller and thinner"), and with a computer graphics program change a picture of a Romanesque cathedral. They then compare with real pictures of Gothic cathedrals. Alternatively, students can put roofs, windows, statues etc on the two churches from cut out sheets, then read about the two different kinds and see if the ones they thought looked best were the originals.

Students design impenetrable castles, using descriptions of medieval warfare and their own ideas (but without using any technology that wasn't available then such as electricity). Give prizes for the best defended castles, maybe letting them protest against other people's designs with sentences like "They couldn't (make rifles) at that time" or "They didn't use to (have bullet proof glass)". Alternatively, one group can design the castle and the other group can design siege weapons, and then they can take turns saying why they would win a battle between them.

Students read or listen to the description of a castle and make it from Lego bricks, plasticine or cardboard. If their castle is different from the original when they see it, they can still get points if they can explain why their castle is better.

Students read or listen to the description of a comparison between two kinds of castle, e.g. a Roman fort and a late medieval castle, and use a computer graphics programme to change the one to look like the other. If you don't have access to computers, have a look at the game below.

Students have a plain picture of a castle and read or listen to descriptions of features it had like a portcullis, moat and slit windows and draw them on in the right place.

Students design a schedule for a tournament or village fayre and then draw a poster advertising it, maybe with Gothic lettering

Students decide which photo of a gargoyle is the scariest, cutest, angriest, happiest etc. They then try to draw a gargoyle and get prizes for winning one of those categories.

Students follow written or spoken instructions and make a piece of chain mail out of pipe cleaners. Alternatively or as an extension, the class work together to tell the teacher how to do it.

Students add symbolic objects to a portrait, either by drawing them on or by cutting them from other real portraits and adding them to their own picture

The age of exploration

Students try to plan a meal as similar as possible to their typical lunch, but without using anything that originally came to their country during or after the age of exploration

Students take a modern map of the world and try to make it look like an old one by adding strange looking pictures of real life things like very tall basketball players, very fat people, scary looking animals etc, maybe cut from a magazine

There still be explorers

Students try to come up with a completely original way of climbing Everest or crossing the Atlantic, then the class do research to check which ones haven't been done before. The one that is most original and most likely to succeed wins.

Students design a propaganda poster to support the government in times of war, e.g. by joining the army or giving them scrap metal

Students select 10 objects from the last century to be buried in a time capsule and dug up in the 22nd century, and then make a poster illustrating it or plasticine models of the objects to put in a box

Best gadgets of the century

Students draw a poster of their invention of the century, illustrating how it worked and why it was important

Summary of the century

Students design an impregnable Berlin Wall, and then another team tries to design an escape plan to cross it (or tunnel under it etc) without getting caught

Students choose 10 people from the 20th century they would like to invite to a party, and then design the seating plan

Students write the alternative life story of someone who really died actually living until the end of the century, e.g. Ann Frank becoming a famous author or Martin Luther King becoming president

He was really a woman

Pointing at the past

Students design an outfit for a female explorer or astronaut

Be better with this poster

Students design a poster to persuade people not to continue with foot binding, corsets etc.

Be older with this poster

A little greater than me

On tracing paper, students imagine what things are under the school at different levels and draw them on different pieces of paper and put them on top of each other. The teacher or other students then try to look through all the pieces of paper at the same time and guess what they can see, e.g. "It could be a dinosaur" or "It must be a castle".

It is possible to make any of the following things from history, or models of them: