Why your students don't want to do pairwork

Summary: Students are often less keen on pairwork than their teachers 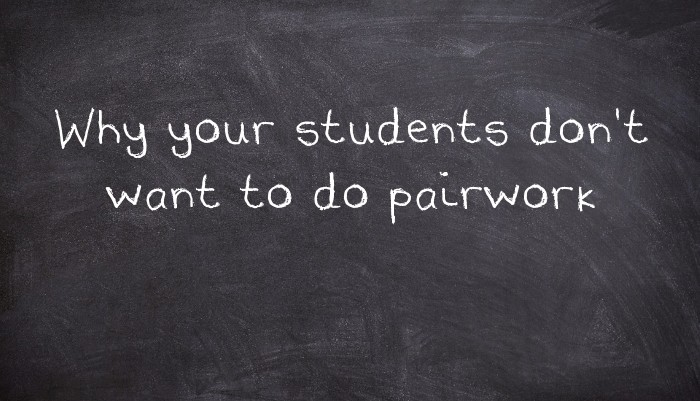 Perhaps the most common cultural clash in the English as a second or foreign language classroom is between teachers who want to get the amount of pairwork up to the maximum possible and students who want it to be less or even zero. By looking at why those feelings sometimes (or even often) occur I hope to be able to give some tips on how to reduce that resistance and prompt some discussion on whether the students may not sometimes be right.

Here is a list of possible reasons (in no particular order) with some tips on how to deal with those points.

1.       They are afraid of picking up mistakes from their partner

This is one of the most common concerns and, quite frankly, sometimes a justified one. Ways to avoid this complaint include providing lots of error correction during and after pairwork, making sure the highest and lowest students don't (often) work together and providing a model for language they can use during the pairwork.

This one is another common fear. Ways of including enough error correction for those that want lots without interfering with your lesson plan include spending time with their group during the pairwork, giving written feedback on errors at the end of the class and offering extra homework or suggested self-study practice on the most common error of the day.

3.       They want practice of speaking out in front of a group of people

I've never come across this one as far as I know, but it could happen. Reactions include using pairwork as preparation for a whole class speaking activity such as a debate, presentation or meeting.

This is fairly common when the teacher is a native speaker and the students haven't met many native speakers before. Ways to indulge this interest without the teacher becoming the centre of the whole class include getting them to work in pairs to write questions to ask you, getting one of the pair to pretend they are you and then check if the things they said are correct, doing a reading on the teacher's hometown, or the teacher joining a different group for each activity.

Although students won't often say they don't want to speak in class, many students understandably find it difficult and uncomfortable. This can manifest itself in a protest against pairwork. Ways round it include also using pairwork for non-speaking tasks such as comparing answers together, starting all pairwork with very controlled speaking such as reading out a script, and using pairs to help each other in group speaking work, e.g. working as a tag team or preparing what they are going to say together.

6.       There are personality clashes between partners

Ways round this include using threes instead of pairs to take away some of the tension, changing pairs after each activity, working with one of the clashing students as a pair if there are an odd number of students in the classroom, and using roleplays so they are in effect working with someone who has taken on a different and less annoying personality.

7.       They feel more shy in pairs than speaking out in front of the class.

This is usually the other way round, but can happen if there are differences in gender, age, status level, language level, personality or approach to the language (e.g. one student correcting the grammar of another), or if one of the students is flirting with the other. Again, careful selection or shuffling of pairs and groups can help in larger classes, as can roleplays and games.

8.       They feel the teacher is being lazy and not doing their job

This is another unspoken concern, but it does exist- either because the teacher is not doing what the students think should be their job such as modelling or error correction, or because you seem to be inactive while the students are doing all the work whilst speaking. As well as busying yourself with closely monitoring groups, writing down the language they use, some selective correction etc while the pairwork is going on, make sure you do all the other things they think you should such as error correction in other parts of the lesson.

9.       They are a class clown, teacher's pet or other show off that wants the teacher's or everyone's attention

You could give them a chance to perform afterwards, e.g. show everyone the roleplay they just performed, let them pair up with you during the pairwork, or put them in a three rather than a pair (if there are an odd number of students in the class) to give them a slightly larger audience.

10.   They had a bad experience with a previous teacher

Although there are many good reasons for using pairwork and many good ways of using it, like anything else it is possible to misuse it. If students had a previous teacher who used it as a way of reducing their own workload or just because they had been told to do it without having any clear idea why or how to do so, students might take a bit of converting. First of all, introduce pairwork slowly or late in the course to give them a chance to come round. In the earlier classes, show them you do all the things their less than professional previous teacher did not, such as giving clear and full grammar explanations or teaching less obvious pronunciation points like linked speech. They should then be ready to trust you when you use pairwork in class.

11.   They just don't understand what pairwork is supposed to be for

With higher level students, you can explain before each activity what that activity is for. If they couldn't understand an explanation in English, make sure your school has a leaflet describing the teaching methodology and the reasons behind it in their own language that they are given when first coming into the school or after they sign up. You could also lead them to the point of suggesting pairwork themselves by doing a whole lesson on language learning methods and posing the question "How can each student in class be given more time to speak?"

12.   Classes in their culture are always teacher-centred

Again, introduce pairwork slowly, live up to their expectations in all other ways, and explain why you use pairwork in terms that are understandable to someone from their culture.

14.   Their favourite teacher didn't do it