Why your students still make mistakes with grammar they know well

Summary: A look at a common and frustrating issue 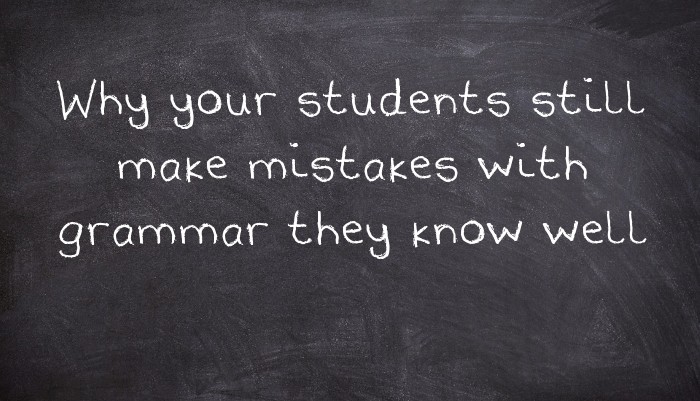 Whether your approach to grammar is to drill it incessantly, explain it thoroughly and/ or hope students will pick it up through exposure to the language, unless you know a magic method that is not explained in any of the popular TEFL books you must have had at least one student who after 6 years of English study still occasionally says "My father have..." and makes you wonder briefly if you know what you are doing in the classroom at all. The bad news is that I don't have that magic formula either, but the good news is that I have found that examining why students continue to make the same errors despite our best efforts can help you make little steps in the right direction and give a sense of perspective.

Possible reasons why students keep on making the same mistakes

There is a lot of evidence to suggest that language learners, like native speaker children, pick up grammar points and stop making mistakes with them in a very predetermined order. For example, third person s mistakes (I do/ he does) tend to persist in both. If this is the problem (if indeed you think of it as a problem), the only solution is patience!

Although you may be surprised when students who have finally stopped saying "He has to goes" still say "He must goes" because both should be infinitives, it may be that the students consciously or subconsciously don't put the two pieces of grammar together as one. The best solution would be to work on making the points as closely associated in students' heads as possible, e.g. doing a lesson on all uses of infinitives, teaching a very general rule, or even pairing questions up where they have to fill the gaps in pairs of sentences with the same word.

If the students are making elementary errors with something they usually don't, it could be because their brains are busier than usual with other things, e.g. coping with the rules of the language game, digesting the latest language point, sorting out a logic or problem solving puzzle, or concentrating on another point like their pronunciation. Learning to cope with many different demands on the brain at the same time is a good thing, as it is what you need to do with the language in real life, but make sure all language input and correction are left to a time when they can concentrate on the language more.

4.       They are overusing one point for good reasons

In both native and non-native speakers, the process of learning a new grammar point seems to often include a period of overextending its use. For example, even people who know the Simple Past well will start using the Past Perfect in situations they would have used (correctly) the Simple Past until the day they studied the new tense . Apart from understanding that this is part of the process and being patient, ways to tackle this could be to give them lots of controlled practice of the new grammar point, come back to the original grammar point they confuse it with a few weeks or months later, and concentrate on correcting one area of confusion at a time.

Anyone who has ever lived in a foreign country can tell you there are days when all your language skills seem to disappear. Again, this is something they will need to be able to cope with eventually. Apart from trying to take away their tiredness and take their minds of their troubles by giving them something easy to do or doing a physical warmer, maybe the best approach is just to be less demanding on that day. This is also a good opportunity to practice your skills in spotting the difference between little slip ups they would usually get right and are probably best ignored on "one of those days", and things they really don't know that are more worth some correction and explanation.

6.       They don't think that grammar point is important

Consciously or subconsciously, native and non-native speakers tend to put a low priority on stopping mistakes with language that does not convey a lot of information- i.e. if they can make that mistake and still be understood putting more effort into it can wait until later. This natural reaction can actually be a sign that they are right and you should move quickly on from the Present Simple to giving them the stacks of vocabulary they will need to reach the next level. There is a chance, though, that they are just missing the way in which they could be misunderstood. The general principle here is to include possible misunderstandings in all error correction. If you can't do so, maybe that is a sign that grammar point can wait until later.

7.       That point is more difficult for them than it seems

The reason why students pick up some grammar points more quickly than the teacher expects and others more slowly is often connected to their first language, e.g. confusions between different uses of similar forms or grammatical forms that don't have an equivalent in L1. Even teachers who know the language the students speak can be miss out on particular aspects of this, such as students who speak a particular dialect or different language at home, or grammatical forms that only educated speakers of that language would be familiar with. Responses to this include rearranging the syllabus to leave more difficult points for particular students until later, concentrating on the particular areas of difficulty they have when the time comes, and approaching the same grammar point several different ways with gaps in between to let their subconscious get to work.

It may be that in the student's native language grammatical forms are dropped when they are speaking informally, in a similar way to "No way!" or "Long time no see" in English. Common examples that students sometimes reproduce in English include dropping the subject or using a different tense. Although this is usually subconscious, it can be reinforced by the language they hear in English pop music and in certain English dialects. Depending on their level, you might be able to do a lesson on substituting these with informal forms we really do use or even doing a whole lesson on the more general grammatical changes between informal speech and formal speech or writing.

Again, there is a chance they are right on this one and teaching them how to express something they couldn't at all with a new grammatical form, new vocabulary, or new functional language might be better than spending more time trying to root out basic errors. If, however, you think lack of accuracy is the main reason they are not being understood, are not ready for the next level, cannot transfer speaking skills into writing skills or will do badly on a test, it is worth letting them know. Clearly showing what effect mistakes can have on communication with dialogues with communication breakdowns etc can also help.

10.   They just have that kind of personality

Just as it is no surprise when some perfectionists become obsessive about getting their sentences right, there are some people whose outgoing nature, slapdash character or hyperactive speaking style just seems to make it difficult for them to stop for a minute and pay attention to what they are saying. Although this is not the only example of a situation when students' language skills could be best improved by them changing their personality, this is no easier to do here than in any other case! Ways to get them to concentrate on accuracy more include making error correction fun with grammar auctions etc, giving them an easy speaking task they only need simple language for and can't get distracted from, and forcing them to slow down to speak to someone who is a lower level (either in reality or by their partner playing that role).