Why your students overuse their dictionaries

Summary: A look at dictionaries in the classroom 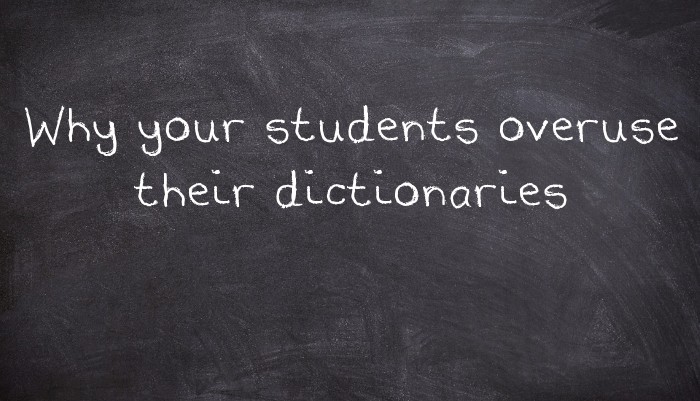 With all the recent excitement about technology in the classroom, it is easy to forget which piece of technology is actually found in most classrooms and how dubious if not downright hostile teachers feel towards it- the electronic dictionary. Few teachers are likely to be able to persuade their students to throw away the one they have got and buy one with less dodgy translations and a decent English-English dictionary in it, let alone to go back to carrying around a big paper one. The one thing we can tackle quite easily is also the one thing that many teachers have been complaining about since long before they became electronic - students just using their dictionaries too much.

Below are some ideas of why students reach for their dictionaries when you would rather they didn't, along with many tips on how to stop it and a few occasions when you can just accept that it isn't such a bad thing.

2.       They don't have enough vocabulary to do the task they have been given

It is strange in a way that vocab pre-teach is not as standard a part of speaking lessons as it is of doing a reading or listening. You can make sure you teach students the most useful language first by doing the activity yourself, noting down any vocab you used or could use, and choosing the best for their level and the most vital to teach beforehand or as they need it. This can also be a good way of seeing whether the task is actually too difficult with the level of vocabulary they already have.

This is the second major reason for why students repeatedly use a dictionary in one lesson, and the main reason we should stop them from automatically doing so. If they get into the habit of translating every word that pops into their heads they will never learn to explain vocabulary they don't know or to use just the language they know well to improve their fluency. It's a long process to get out of this habit, but approaches include immersing themselves in reading and listening to English, using an English-English dictionary, and learning longer pieces of language such as sentence stems rather than single words.

Teachers can tend to assume they know better than the students on this point, telling them that they should be concentrating on skimming and scanning skills etc more than on vocab. For some students, however, the only purpose for reading in English is to improve their vocabulary when they speak. You can cater for such students by teaching some vocabulary before and after reading or listening, and having time at the beginning of the next lesson to answer vocabulary questions after they have read through it again with their dictionary at home.

As the students don't understand the words they are looking up, they obviously don't know which words are important for understanding and/ or useful to learn. For words useful for understanding, you can help them by teaching them to analyse the important parts of the question and underline the relevant part of the text. To choose which words are important to learn, you can teach them how to use the symbols which recent learner dictionaries use to mark words which are the 1000, 5000 or 10,000 most common in English.

With some people, half the time when they don't understand or don't know what to say and reach for their dictionary, they don't even know what they are going to look for in it. Sometimes it turns out that what they were actually lacking was ideas, which even electronic dictionaries are still a few years away from supplying! One way to get rid of this security blanket use of the dictionary is to replace it with something else, e.g. the reference part of the textbook, the vocabulary list parts of their notebook, the teacher or another student. The fact that this resource is more limited (or in the teacher's case can deliberately become more limited), means that they are more likely to lose their dependence on it. Other approaches are mainly based on making sure that the students aren't nervous and lost for words in the first place, through careful grading, not asking for too much imagination etc.

This is a skill that is fairly well taught in textbooks, but often as a small extra task that gets skipped when the teacher runs out of time. Choosing this as the main focus of a text a couple of times can be well worth the time and effort. Methods of guessing a word from context include looking elsewhere in the text for synonyms and antonyms, seeing what other words could replace it without changing the meaning of the text, seeing what other words they already know it looks similar to, and looking at word roots from Greek and Latin etc.

Techniques you can teach the students to explain a word they don't know how to say in English include the use of gestures, drawing, and relative clauses to describe things.

Sometimes students reaching for their dictionaries can be explained simply by the fact that they have spent time and effort on buying it and getting it to school and they don't want that to be a waste of time. As well as letting them know when you are happy for them to use dictionaries, there are also activities entirely based around them, such as Delphic Dictionary, where you look up random words and tell someone's fortune with them for practice of future tenses.

10.   They want a translation to write down

This can be the root of one of the most annoying times that ever come up in class, when you have finally explained something so everyone understands and then they still reach for their dictionaries. This is often because the explanation you have given is too long or complicated for them to write down in their notebooks next to the new word. The secret is to write what you want them to copy on the whiteboard. Apart from supplying a translation yourself, you could give a synonym, opposite, different part of speech of the same word that they already know, or a simple sketch.

This may be a previous teacher's fault instead of yours, or even just a personality trait of one or more students, but this situation does come up and has to be dealt with. The first thing is to admit when you are wrong and insist strongly when you know you are right. Another is to prepare yourself well for the doubters by looking up everything in dictionaries or grammar books before the class, or even take those books into class to use as back up. The back up books can be particularly useful if their dictionary is actually wrong but they believe it more than you- if your book is thicker, you win!

12.   They can't understand the explanation

Ways to prepare to give easy explanations include to look all the words up in an Elementary learners' dictionary before the class and use those definitions when explaining, or to get pictures of all the things that could come up from the internet.

Written by Alec Case for UsingEnglish.com