Why your students have problems with listening comprehension

Summary: A look at why learners may find listening difficult 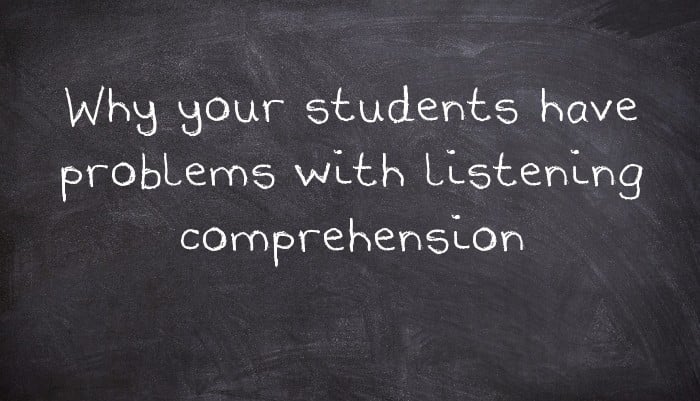 Modern textbooks are awfully clever in the way they slip seamlessly from an interesting listening text into explanation and practice of a grammar point. It is hard to see how such a system could possibly be worse that just launching into a grammar point- until, that is, your students have listened three times and still haven't understood enough to answer the first question, let alone move onto the final language point. You can only imagine that none of the teachers who reviewed the textbook before publication had that problem, and indeed listening comprehension skills vary a lot from country to country and from person to person. The reasons why some people find listening in a foreign language difficult vary just as much, so eleven possible reasons why it might be so are given below, along with some ideas on how to tackle each point.

Why some students find listening difficult

1.     They are trying to understand every word

Despite the fact that we can cope with missing whole chunks of speech having a conversation on a noisy street in our own language, many people don't seem to be able to transfer that skill easily to a second language. One method of tackling this is to show them how to identify the important words that they need to listen out for. In English this is shown in an easy-to-spot way by which words in the sentence are stressed (spoken louder and longer). Another is to give them one very easy task that you know they can do even if they don't get 90% of what is being said to build up their confidence, such as identifying the name of a famous person or spotting something that is mentioned many times.

2.     They get left behind trying to work out what a previous word meant

This is one aspect of the problem above that all people speaking a foreign language have experienced at one time or another. This often happens when you hear a word you half remember and find you have completely lost the thread of what was being said by the time you remember what it means, but can also happen with words you are trying to work out that sound similar to something in your language, words you are trying to work out from the context or words you have heard many times before and are trying to guess the meaning of once and for all. In individual listenings you can cut down on this problem with vocab pre-teach and by getting students to talk about the same topic first to bring the relevant vocabulary for that topic area nearer the front of their brain. You could also use a listening that is in shorter segments or use the pause button to give their brains a chance to catch up, but teaching them the skill of coping with the multiple demands of listening and working out what words mean is not so easy. One training method is to use a listening or two to get them to concentrate just on guessing words from context. Another is to load up the tasks even more by adding a logic puzzle or listening and writing task, so that just listening and trying to remember words seems like an easier option. Finally, spend a lot of time revising vocabulary and doing skills work where they come into contact with it and use it, and show students how to do the same in their own time, so that the amount of half remembered vocab is much less.

3.     They just don't know the most important words

Again, doing vocabulary pre-teaching before each listening as a short term solution and working on the skill of guessing vocab from context can help, but please make sure that you practice this with words that can actually be guessed from context (a weakness of many textbooks) and that you work on that with reading texts for a while to build up to the much more difficult skill of guessing vocab and listening at the same time. The other solution is simply to build up their vocabulary and teach them how they can do the same in their own time with vocabulary lists, graded readers, monolingual dictionary use etc.

4.     They don't recognise the words that they know

If you have a well-graded textbook for your class, this is probably a more common (and more tragic) problem than not knowing the vocabulary at all. Apart from just being too busy thinking about other things and missing a word, common reasons why students might not recognise a word include not distinguishing between different sounds in English (e.g. /l/ and /r/ in "led" and "red" for many Asians), or conversely trying to listen for differences that do not exist, e.g. not knowing words like "there", "their" and "they're" are homophones. Other reasons are problems with word stress, sentence stress, and sound changes when words are spoken together in natural speech such as weak forms. What all this boils down to is that sometimes pronunciation work is the most important part of listening comprehension skills building.

5.     They have problems with different accents

In a modern textbook, students have to not only deal with a variety of British, American and Australian accents, but might also have Indian or French thrown in. Whilst this is theoretically useful if or when they get a job in a multinational company, it might not be the additional challenge they need right now- especially if they studied exclusively American English at school. Possibilities for making a particular listening with a tricky accent easier include rerecording it with some other teachers before class, reading all or part of the tapescript out in your (hopefully more familiar and therefore easier) accent, and giving them a listening task where the written questions help out like gap fills. If it is an accent they particularly need to understand, e.g., if they are sorting out the outsourcing to India, you could actually spend part of a lesson on the characteristics of that accent. In order to build up their ability to deal with different accents in the longer term, the best way is just to get them listening to a lot of English, e.g. TV without dubbing or BBC World Service Radio. You might also want to think about concentrating your pronunciation work on sounds that they need to understand many different accents rather than one, and on concentrating on listenings with accents that are relevant for that particular group of students, e.g. the nationality of their head office.

6.     They lack listening stamina/ they get tired

This is again one that anyone who has lived in a foreign country knows well- you are doing fine with the conversation or movie until your brain seems to reach saturation point and from then on nothing goes in until you escape to the toilet for 10 minutes. The first thing you'll need to bear in mind is to build up the length of the texts you use (or the lengths between pauses) over the course in exactly the same way as you build up the difficulty of the texts and tasks. You can make the first time they listen to a longer text a success and therefore a confidence booster by doing it in a part of the lesson and part of the day when they are most alert, by not overloading their brains with new language beforehand, and by giving them a break or easy activity before they start. You can build up their stamina by also making the speaking tasks longer and longer during the term, and they can practice the same thing outside class by watching an English movie with subtitles and taking the subtitles off for longer and longer periods each time.

This could be not just a case of a student having struggled with badly graded listening texts in school, exams or self-study materials, but even of a whole national myth that people from their country find listening to English difficult. Whatever the reason, before you can build up their skills they need their confidence back. The easiest solution is just to use much easier texts, perhaps using them mainly as a prompt to discussion or grammar presentations to stop them feeling patronized. You can disguise other easy listening comprehension tasks as pronunciation work on linked speech etc. in the same way.

8.     They are distracted by background noise

Being able to cope with background noise is another skill that does not easily transfer from L1 and builds up along with students' listening and general language skills. As well as making sure the tape doesn't have lots of hiss or worse (e.g. by recording tape to tape at normal speed not double speed, by using the original or by adjusting the bass and treble) and choosing a recording with no street noise etc, you also need to cut down on noise inside and outside the classroom. Plan listenings for when you know it will be quiet outside, e.g. not at lunchtime or when the class next door is also doing a listening. Cut down on noise inside the classroom by doing the first task with books closed and pens down. Boost their confidence by letting them do the same listening on headphones and showing them how much easier it is. Finally, when they start to get used to it, give them an additional challenge by using a recording with background noise such as a cocktail party conversation.

Young people nowadays, they just can't cope without multimedia! Although having students who are not used to listening to the radio in their own language can't help, most students find not having body language and other cues to help a particular difficulty in a foreign language. Setting the scene with some photos of the people speaking can help, especially tasks where they put the pictures in order as they listen, and using video instead makes a nice change and is a good way of making skills such as guessing vocab from context easier and more natural.

10. They have hearing problems

As well as people such as older students who have general difficulty in hearing and need to be sat close to the cassette, you might also have students who have problems hearing particular frequencies or who have particular problems with background noise. As well as playing around with the graphic equaliser and doing the other tips above for background noise, you could also try setting most listening tasks as homework and/ or letting one or more students read from the tapescript as they listen.

This was the problem that took me longest to twig, but voices that are clearly distinct to a native speaker can be completely confusing for a non-native speaker. I haven't quite worked out why those problems occur on some occasions and not on others, but the native speaker could be identifying a lisp, an accent or a difference in range of tone that escapes a student. You can avoid these problems by using texts with one woman and one man, or you can practice them with tasks where the students only have to count how many times the speaker changes.