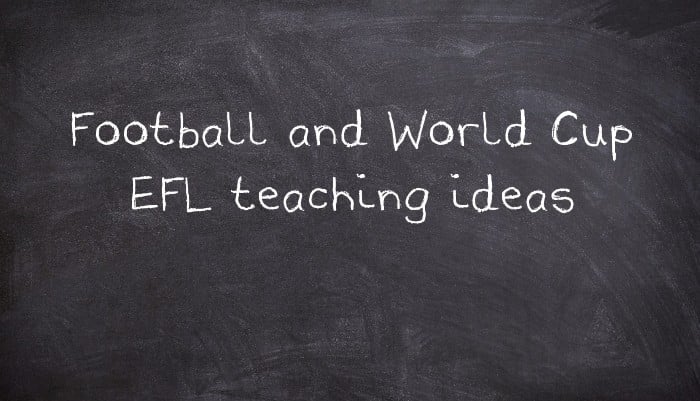 The World Cup is the kinder face of globalization and so a great chance to bring a truly international event into almost any classroom. It could also motivate students who usually would much rather be outside! There are two ways of exploiting this: teaching football vocabulary so that they understand English language sources on the World Cup such as TV commentary and news reports, or using the topic of the World Cup to teach language that is unconnected to football, e.g. the target language that is in the textbook. Ideas for both are given below in that order, with activities that teach football vocabulary and other language in equal measure in the middle.

Don't miss our online Glossary of Football Vocabulary. This extensive glossary of football/soccer vocabulary is designed to help students learn the language associated with the beautiful game.

Football jokes are very easy to find on the internet. Get students matching the jokes to the punchlines, writing punchlines and reading to compare their ideas with the original, guessing the meanings (or double meanings) of words from context, or putting football vocabulary back into the jokes (e.g. Football players are the only people who can ______________ and still look neat"- dribble). Similar things can be done with anecdotes.

There are loads of collocations in football vocabulary, e.g. score + a goal, win + a trophy and blow + the whistle. Any typical games for collocations can be played with these, e.g. pelmanism, dominoes, brainstorming (e.g. a board race), matching sentence halves with the help of the collocations in them (e.g. "He headed the ball into the back" + "of the net"), and spotting the one wrong collocation in each section.

Students could guess which country each piece of slang comes from, guess whether each definition is correct (Call My Bluff), match the words to the correct definitions, or guess where the idiom comes from (e.g. "park the bus" being like putting a bus in front of the goal).

Give students at least twenty football words and expressions (as cards or on a worksheet), and ask them to take turns telling the story of a football match or championship while using as many of those words as they can.

You could ask students to predict what words they will hear from a video of part of a football match (easy to find on YouTube) by watching it once with the volume turned down, making their predictions, then watching with the volume up to check. You could give one point for each word they guess correctly and minus one point for each word that is not included. Alternatively, students could listen to the commentary of a short extract of some TV football and mark the route of the ball on a plan picture of a football pitch, then watch and check. This would work better with radio and TV footage of the same move, as TV commentary tends not to be explicit enough to understand without seeing it.

These vocabulary guessing games are all ones where you can present a large amount of language in an active way by getting them to guess something basic about the language as they hear it, maybe with the language being put together with similar words and phrases to make it easier to guess which category it belongs to. One possibility with football vocabulary is to give students a list of words, phrases, sentences or even paragraphs and get them to guess whether they refer to defending (block, tackle, offside trap, etc) or attacking (shoot, pass two men, cross, etc). You can do something similar by getting students to guess whether the words and phrases refer to things or people, classifying verbs by whether they are things the referee does/ things the players do/ things the crowd do, or by getting students to put the words or expressions into groups depending on whether they are against the rules (hand ball, stamping) or not (back heel, throw in).

You could give them words and expressions that they could rank from the most to least skilful ("bicycle kick" being high skill and "fumble" being low skill), by the time in the championship (from "qualification round" to "the final" and beyond), by how positive and negative words are (from "genius" to "donkey"), from the back to the front of the pitch, by physical size, etc.

Ask students to identify if an expression is British English, American English, or only used in their country.

Football and other vocab

Part Two: Using the topic of football to teach other language

Set the students moral conundrums (e.g. "Would you admit to a hand ball if the referee didn't see it?" etc) or ask them to imagine that they could make any changes they wanted (to the rules of football, members of their national team in the World Cup, fixtures their team has to play, etc)

Give the students one fact from football history and ask them to list all the consequences of that having been different, e.g. "If England had entered the World Cup when it first started, they would have won all the time", "If they had won all the time, Hitler would have concentrated on the World Cup rather than the Berlin Olympics", "If Hitler...", etc.

Ask students to make predictions about an upcoming match day or championship, e.g. different aspects of the World Cup. Things they could predict include number of goals, red cards, draws, European teams in the semi-finals, and top scorer. You could then check the accuracy of their predictions, or if they need instant results you can throw a dice to represent the game.

Another possibility is to ask students to imagine how different football will be in 50 years' time, e.g. changes in technology, rule changes, and which the most successful football teams will be.

Going to for predictions with present evidence

The best way of practising this is to pause a video of a football match just as something is about to happen, and get the students to predict what that will be. To be the right tense, it will need to be something where there is already some kind of evidence on the screen, although you could contrast this with Will for Predictions by asking them to also predict the consequences.

Going to for plans

Ask students to decide on a plan to defeat the opposition (maybe including underhand methods), a training regime, a bid to host the World Cup, or plans for how to polish up a town before the World Cup arrives. They can then present their ideas to the class for everyone to vote on the best. This can be contrasted with Will for Spontaneous Decisions if you ask them to use that tense when making their decisions as a group but Going to when they introduce it to the class.

Design some accusations using this tense and football vocabulary, e.g. "When I saw you, you were spitting at the referee. Why were you doing that?", and see if they can come up with some innocent reasons

Any kinds of football stories can be used to practice narrative tenses, e.g. the story of one world cup, the invention of something (e.g. the Mexican wave), stories of a single match, or anecdotes.

A topic that is always good for practice of passives is inventions and other innovations, e.g. "The golden goal was introduced in 1991". You can make this more fun by turning it into a trivia quiz, for example in the format of a local quiz show such as "Who Wants to be a Millionaire?"

The best way of linking this to football is to use quotes from footballers, coaches, pundits etc. The student could then guess which of these people it came from, match the quotes to the people, guess what they were talking about (e.g. which player, match or team), or spot a word that is wrong. Ways of making sure that Reported Speech is put into these include pairwork dictations and discussion of the quotes from memory after they have turned their worksheets over.

As with passives above, you could easily practice question formation with general knowledge quizzes, including subject questions like "Who beat Germany in the final?" A good way of getting lots of questions practice in is to play Jeopardy, a television quiz show in which the quiz master gives the answers and the contestants have to come up with the questions.

Another good way of getting lots of questions into the class is to roleplay interviews and press conferences, e.g. ones at the end of a match or at the end of your career. It might also be possible to design a football version of the Alibi Game.

Pick some vocabulary that includes people, places, times and things, and get students to define which one they are thinking of (e.g. "This is a person who wears an armband and leads the team" for "captain") until their partner guesses which one it is. You can extend this game by adding three words to each card that they cannot that they cannot say while they are speaking (e.g. "lead", "top" and "command" for the same example) to make it more challenging and to make them think about the meaning of the words more carefully. They can then decide on taboo words for other vocabulary and play the Taboo game again.

Another game which uses definitions to practice relative clauses is Call My Bluff, where students choose between three definitions of a piece of football vocabulary that they probably won't know, e.g. "An action that involves hitting your opponent with your head", "A ball that is very hard" and (the correct one) "A kick that involves putting through another player's legs" for "Nutmeg". They can then make up false definitions of other vocabulary to try and fool their partners or other teams with. You can add non-defining relative clauses to this by including which variety of English the expressions come from, e.g. "Parking the bus, which is an English expression, is the time when you pull all your players back to defend"

Modals of obligation and prohibition

Ask students to guess whether the rules that you tell or show them are true football rules, past football rules, rules from other sports, or just completely made up. With similar sentences, they could also add football vocabulary or modal verbs to the gaps that you have put in. Venn diagrams could also be used here, e.g. "You can't use your hands" for both hurdling and football.

Modals of probability and possibility

Students guess what a picture of a football person or thing is while the teacher reveals it bit by bit or puts an OHP into focus. They could also say how they sure about certain things happening and not happening in the World Cup, e.g. "South Africa can't possibly win".

You can practice numbers with the stats of a team, country, qualifying campaign, player, stadium, brand etc. Games include being given clues (e.g. "Much higher") until you guess the right number, and Top Trumps.

Ask students to describe footballers from their photos, then match those photos to written descriptions. You can add more to that by asking them to put the photos in time order (by fashion through the ages etc), or by doing the same thing with different images of one footballer (e.g. Beckham).