How to teach opposites 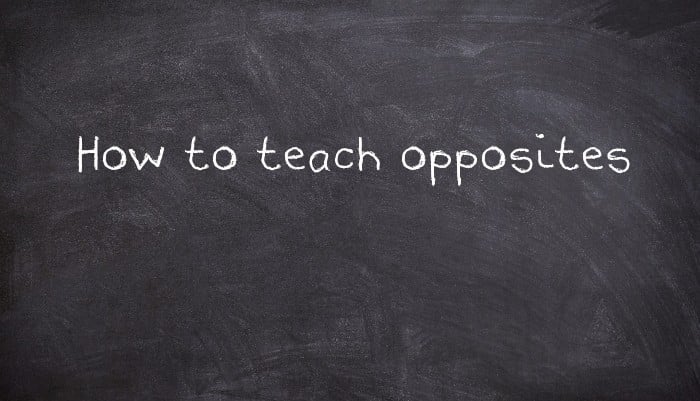 Although it can sometimes be difficult to say with certainty that a particular pair of words are really opposites, I think most teachers would agree that using the word “opposites” or “antonyms” to describe pairs like “dark”/ “fair” and “right”/ “wrong” helps makes language both memorable and easy to explain. Explaining language this way also avoids the need for translation and often makes the meaning clearer than a translation would. This article gives some particularly effective ways to present and use such language, and includes some very extensive lists of opposites that you can choose from when planning your classes. There is also an article called Classroom Activities for Teaching Opposites on this site with ideas to use in the practice and production stages of your lesson.

Opposites are most often used to teach adjectives. Types of adjectives which have lots of opposites include:

The idea of teaching opposites can also be stretched beyond simple adjective opposite pairs like “big” and “little”. Within adjectives, extensions of the use of opposites include:

A lesson with comparative adjectives with opposites meanings like “more expensive” and “cheaper” can be a great way of presenting and/ or practising “-er” and “more…”.

A lesson on negative prefixes in opposites like “unpunctual” and “imprecise” can be a good start to the more general topic of affixes with particular meanings, some of which, like “pre-”/ “post-” and “macro-”/ “micro-”, also have pairs with opposite meanings.

You can also go beyond adjectives. Other kinds of opposites that you might want to introduce in class include:

You could also say that words used to talk about different genders like “her”/ “his” and “bride”/ “groom” are kinds of opposites.

One of the nicest things about teaching opposites is that there are symbols which are perfect to show synonyms and antonyms. Students might already know the symbols from school, and if not they are easy to introduce and explain, and incredibly useful in every class from then on. An equals mark (“=”) between two words or expressions obviously means they have the same meaning, and a two-ended arrow (like “ßà”) between two words or expressions means that they have opposite meanings. On my initial TEFL course I was taught to use an equals mark with a vertical line through it to show opposites instead, but this crossed out equals mark is much more useful with its original mathematical meaning of “not equal”, for example to show that “enormous” is not quite the same as “big”. I therefore strongly suggest sticking to the two ended arrow to show two things with opposite meanings.

If students already know the two-ended arrow symbol, then you can easily explain that in English we call that relationship “opposites” and/ or “antonyms”, and that is basically your grammar presentation done! You can also illustrate the meaning of the words “opposite”/ “antonym” with simple example words and/ or drawings of “tall”/ “short”, “fat”/ “thin”, etc on either end of that arrow.

Perhaps the most common way of presenting opposites in context is in a dialogue that has two people with very different views on something such as something they want to buy together, the best person for a job, or a holiday, e.g. “I thought it was lovely” “Lovely? Are you kidding? I thought it was really horrible”. Similar dialogues include someone criticising some else for doing everything the opposite of how they were told, two people remembering something like a school trip when they were young differently from each other, and two people contrasting their experiences.

If you find or make such a dialogue, it is simplest to start with some comprehension questions, for example on what topic the two people are talking about and who feels more positive or negative about that thing. Alternatively, you can cut up the dialogue and ask students to put it back into order (= a jigsaw text). After the initial comprehension check, students can find and match up the words with opposite meanings in the text, and then perhaps label them as positive and negative if you have chosen ones with clear connotations.

These kinds of dialogues are fun and students usually also enjoy writing or taking part in similar dialogues in the practice stage, but to present all the opposites that you need for the class tends to make such dialogues rather long and unrealistic. Luckily there are plenty of other ways of giving enough context so that students can match up pairs of words even if they didn’t know them (well) before the lesson.

The easiest matching task is for students to match up pairs of words which have accompanying pictures, e.g. matching up a card with a picture of an igloo and the word “cold” and a picture of a desert and the written word “hot”. This is a bit too easy for most classes and some students may avoid reading the words at all. However, you can do something similar with sentences to give context instead of pictures, e.g. sentences for students to match like “The South Pole is cold” and “The Sahara Desert is hot”. They can then underline and match the actual opposite words.

Another kind of context is providing some words that they already know. For example, if they already know some synonyms and antonyms of words that you want to present, you can just get them to label the synonyms and antonyms on each line of the worksheet, starting with the one they know each time and then guessing that the one they didn’t know must be the other kind of word. For example, if they already know that “huge” is a “synonym” of “gigantic”, they should easily be able to label “gigantic/ huge/ tiny” with the words “synonym/ synonym/ antonym” or “the same/ the same/ opposite”. You can then test their memory with a more challenging task where they match up the same antonyms and synonyms.

Quite a few of the practice activities described in the accompanying article Classroom Activities for Teaching Opposites can also work as preparation for a presentation stage. For example, action songs and picture books work well even ifthe learners know few of the words before starting the activity.

Alternatively, you could give students opposites pairs that are already matched up to use during a speaking activity, then test them on their memory of that language afterwards (an approach that I often use and call Use Recall Analyse). For example, you could give them a worksheet with pairs of words like “nice ßà horrible” to use during a personalised discussion activity where they find out views that they share. When they finish, ask them to remember and match up the same words without looking back at that worksheet.

Note that words divided by a slash (/) often don’t have exactly the same meaning, they are just different opposites of the words on the other side of the dash. Many words below are also possible with different parts of speech, e.g. “poverty/ wealthy” as well as “poor/ wealthy”.

a big nose – a little nose

a curved nose/ a hooked nose – a straight nose

a flat stomach – a bulging stomach/ a beer belly

a fringe – a parting

a rough chin – a smooth chin

a round chin – a square chin

Other opposites for describing people

upside down – the right way up

out of date – up to date

accelerate/ speed up – brake/ slow down

apply/ put on – remove/ strip off/ take off

approach – keep back/ keep away/ step back

beckon – wave someone away

blow up/ inflate – deflate/ let down

breathe in/ inhale – breathe out/ exhale

cough up/ spit out/ vomit – swallow

dispose of/ throw away – keep/ store

do up/ fasten – undo/ unfasten

drop/ put down – lift/ pick up

enter/ go in – come out/ leave

erect – bring down/ pull down/ take down

go to sleep – wake up

insert/ slot into/ plug in – pull out/ unplug

kneel/ lie down/ sit – stand up

nod (your head) – shake your head

break in – break out

break up/ split up – get together

blow up – let down

bring forward – put back/ put off

bring up/ chuck up/ puke up – keep down

check in – check out

cheer up – get down

chill out – stress out

come down with – get over

cool down – warm up

dress down – dress up

eat in – take away/ take out

hand out – take in

hang up – pick up

keep away/ keep out – let in

leave out/ take out – put in

look down on – look up to

mess around/ play around – settle down

mess up – sort out/ tidy up

pick up – put down

put away – take out

put on – take off

put up – take down

rub out – write down

run after/ run towards – run away

speed up – slow down

switch on/ turn on – switch off/ turn off

by the sea/ on the coast – inland

close to/ near (to) – distant from/ far from

in front of – behind

on the right – on the left

Other nouns for describing people opposites

after/ later – before/ earlier

in the morning – in the evening/ at night

the day after tomorrow – the day before yesterday

recent past – distant past

everyone/ everybody – no one/ nobody

see you later – see you sometime