How to teach supporting your arguments

Summary: Presentation and practice for the most important part of giving opinions. 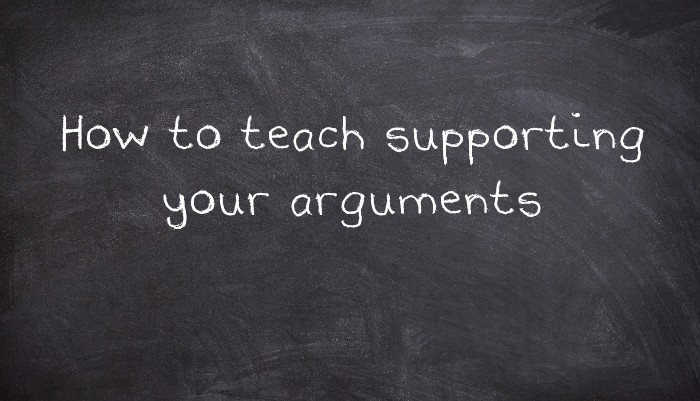 The ideas behind this article go back to one of the first specific conversations skills courses I taught, which ended with a graded debate to test what students’ had learnt. Despite my students’ best efforts to use the giving and asking for opinions language we had practised, the conversation naturally included much more support for their arguments than actual opinions. In the next few courses I therefore switched to a much more sensible format of a quick lesson or two on strong and weak opinions before classes on giving examples, sharing personal experiences, etc. Other reasons for this approach include:

- Needing more support than actual opinions is also true for writing such as reports, essays and academic writing – including in EFL exams

- Supporting arguments is also useable in contexts other than giving opinions

Ways students can support their arguments include:

- Conceding points/ Destroying possible arguments against/ Looking at both sides

- Logical arguments, e.g. cause and effect

Things on one line are related and so could be taught together, or ones like generalising and data are sufficiently different to be taught separately.

As well as individual classes on at least some of the points above (many of which I am writing separate articles on), it is also important to have activities that look at supporting arguments as a whole. I tend to briefly introduce students to the whole idea of supporting their arguments near the beginning of a course, then review it after individual lessons on looking at both sides, using strong language, etc.

The activity which I most often use to introduce supporting arguments for the first time is to get students to reflect on their performance after doing a communicative activity such as a roleplay debate. After finishing the speaking, students give themselves scores for how well they politely interrupted, asked for opinions, politely disagreed, used clarifying/ checking phrases etc, with supporting their arguments being one thing on that list. They then discuss how they could have done each thing better, leading onto to a general discussion of and brief presentation of ways to support their arguments.

If you want to present some phrases for supporting arguments before looking at some ways of doing so in more detail, the obvious approaches are asking them to brainstorm phrases into (some of) the categories above and/ or asking them to put phrases that they have been given into those categories. For example, students could brainstorm “In my experience” into the “Experiences” column and/or put “According to…” into the “Quoting column”. To add more of a Test Teach Test approach, you could give them the list of suggested ways to support their arguments to give them ideas during an initial speaking task, then ask them to put phrases into those categories afterwards.

A good way of leading into the brainstorming of phrases is to get them to ask each other to support their arguments with questions like “Can you give me an example (of what you mean)?”, “What do the experts think about that?”, and “Is that always true?”/ “How generally true is that?” If you want to score it, you can give one point for a successful answer and one point for a question which doesn’t get a successful answer. You can give students the whole questions (“Do you have any figures on that?”), key words to make questions from (“figures”), or functions that they should ask about (“data”). After finishing the game, they can brainstorm phrases that they could have used in their answers (which having the questions there will also help with).

A good way to make students use the language in practice activities is to have slips of paper with “examples”, “statistics”, and other names of ways of supporting their arguments on. There are many possible activities with those, for example:

Cards to argue with

The cards are spread out on the table and students take them as they want to use that kind of support for their position. You will need to decide if the winner is the person who has the most cards at the end or the person who seems to have used those things to support their arguments better (e.g. has actually won the argument).

Discard the cards to argue with

This is the same as Cards to Argue With above, but with the cards dealt out and students discarding cards as they use those kinds of support for their argument.

The longer and longer arguments game

A student chooses one of the cards and talks about the topic using that kind of support for as long as they can. Their partner then chooses a second card and tries to speak for longer with those that kind of support plus the one their partner used before. This continues with more and more cards and longer and longer speaking until one person speaks for less time than the last person to speak, at which point they choose another topic and start again. The things that they speak about can be just topics like “Ways to control teenagers”, or they can be given different sides of the argument to support, e.g. “Concentrate on economic growth” for one student and “Concentrate of financial stability” for the other.

Use that support until you lose

One student chooses a card and the students in that group do that thing on the topic they are speaking about until they all give up, at which point the card goes to the last person to do so accurately. For example, students generalise about the topic of “The breakdown of marriage” until everyone runs out of ideas or says things which are almost certainly inaccurate, then the last person with a statement which everyone accepts gets the card and therefore one point. They then repeat with other cards, perhaps on different topics.

Guess the topic from the support

Students give support for an argument that their partner doesn’t know yet until their partner guesses what they are speaking about. This can be done with their own choice of cards or in response to their partner’s choice in cards, perhaps with questions like “Can you explain the point another way?”

To save cutting up, all the activities above can also be done with students just ticking things off worksheets, and some can also work with just a list of functions on the board or even just students’ own choice of support for their arguments.