How to teach defining and non-defining relative clauses 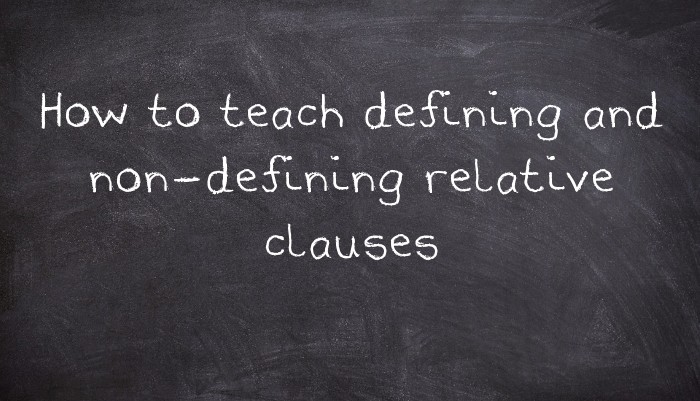 However, if I only have one brother or you already know which one I’m talking about, the info about getting the sack is interesting but optional, as in “My brother, who I told you was getting a sack, is getting a promotion”. As which brother is defined in other ways, this is a non-defining relative clause. That it is a non-defining relative clause and that the info is optional is indicated by commas and by a pause and change in tone in speech, in a similar way to how brackets show things which are not essential in sentences like “A ball (the blue one) has gone missing”.

The same is true about the relative pronoun “why” in “the reason why…”, but as this is the only time that “why” is a relative pronoun, I generally don’t present it at all. You obviously also can’t split “a time when” and “a place where” with commas, but “when” and “where” can be used in some non-defining relative clauses (“Midnight, when the cockroaches dance round the kitchen, always gives me the creeps”, etc). I therefore don’t teach this as a difference.

Other relative pronouns (“which”, “who”, “whose”, “preposition + which”, and “whom” if you decide to teach it) can be used in exactly the same way in defining and non-defining relative clauses.

How to present defining and non-defining relative clauses

Before deciding how to present this grammar, you’ll need to decide which of the many similarities and differences above you want students to work out and practise. For example, at Intermediate level that could be:

From about Intermediate level, it should be easy to find or simplify a text which has enough examples of relative pronouns to include most of these patterns. Almost any text could work this way, meaning that it’s fairly easy to find one t match the topics that you are covering in the book, but I’ve found that stories and reviews work particularly well.

Students should start with tasks to check their understanding of the text, with at least some of the questions focussing on the parts where the relative clauses are, but with no actual grammar questions yet. They can then look at the text again for how the word “that” is used, how commas are used, etc. You can then use extra individual sentences to add other any useful grammar that is not in the text such as “whose” and “when”, preferably with sentences which are on the same topic as the text.

A slightly more challenging and interesting task after the comprehension questions is for students to be given the same text with the relative clauses taken out and mixed up. Ask the students to put the text back together from memory, logic and their grammar knowledge. You can then discuss why some of the matches weren’t possible, e.g. because we wouldn’t know what was being talked about if a non-defining relative clause was put in a place where more info was necessary. After the analysis stage, they could then put in a few extra relative clauses which you left out of the original text and/ or which you wrote to also go in there.

It is also possible to present all the grammar through separate sentences. Although it is more common to use this idea just for defining relative clauses like “Scissors are things which are used to cut paper”, non-defining relative clauses can also be included in definitions of recent vocabulary like “‘Pension’, which is a noun, means the money that you get when you retire, usually in your 60s”. For the first stage students can simply match the vocabulary to the definitions. Alternatively, for more challenge you can split the definitions into two and get them to match the words to two parts and/ or think about which bits go together. They can then analyse the language in those definitions for what relative pronouns are used, etc.

How to practise defining and non-defining relative clauses

These are all ideas which include both kinds of relative clause in the same activity. Some of the practice tasks, such as the Commas Dictation, could also be used in the presentation stage.

Students listen to the teacher read out the text that they have in front of them and add any missing commas by the logic of the text, their grammar knowledge of what words can and cannot go after commas, and listening for pauses and changes in intonation. They then compare it with the full text with commas, and ask about any which they have missed out or also added. If you do this at the presentation stage, they can then work out why those places and not others have commas in them.

Make a pack of cards with a relative pronoun or a just comma on each (including blank cards if you want to practise relative clauses with no relative pronouns). Students read out a first line that their teacher has given them (such as “It was a dark and stormy night”), then take turns continuing the story. While they make the story, they should try to use the words and/ or commas on the cards to change, extend or follow what their partner said, e.g. changing “Lightning flashed across the sky” to “Lightning, which was never seen in that part of the country usually, flashed across the sky” with the “which” card or comma card. To make it into a competition, the cards can either be spread across the table face up for student to take as they use them or dealt out to be discarded as they add them to the story. You could also have a final more challenging stage where they take the cards one by one and can’t take another until they have added that to the story.

Students make sentences where either the relative clause or the main clause (but not both) are false, then see if other people can spot the wrong information. These can be personal statements, trivia statements and/ or information about vocabulary from the course like “Cautious, which is a noun, is the opposite of reckless”.

Students make or are given a short sentence like “This school is in a suburb” and take turns making it longer by adding extra words, clauses, etc. They continue making it longer and longer until they add something untrue, give up, or need to add a full stop. Both defining and non-defining relative clauses should naturally come up in this game without any specific encouragement.

Students fill in “five down”, “four across”, etc with words and expression that match the definitions which are given. This is another activity that is often used for just defining relative clauses but can be adapted to cover both by sometimes including extra hints like “…, which has seven letters,…” and “…, which starts with P,…” Perhaps after completing an example crossword from the definitions which are given, students can make up crosswords to test other groups with, including such extra hints with non-defining relative clauses in at least half of the questions. If you give them Student A and Student B versions of a crossword with different answers already completed, the same can also be done orally.