How to teach relative pronouns

Summary: How to present and practise that, which, who, whose, etc. 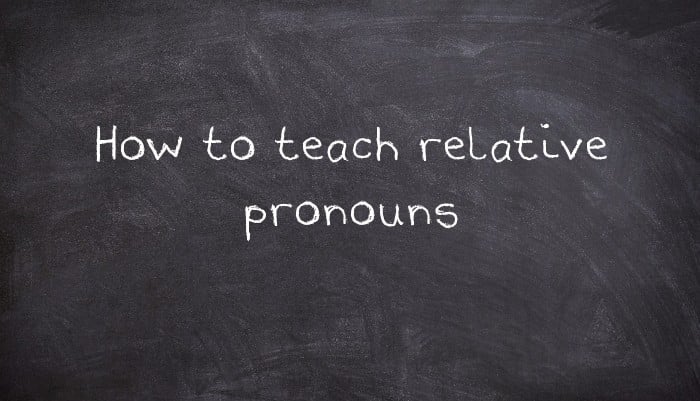 Although most textbooks have a section on relative clauses, students often get confused specifically about when to use “which”, “that”, “who”, “whose”, “when”, “why” or “whom”, and when not to. That can therefore make it worthwhile to have a class or part of a class focussing on relative pronouns. This article gives tips on teaching such a lesson. There are also other articles on this site on teaching relative clauses more generally and on specific kinds of relative clauses.

What students need to know about relative pronouns

Relative pronouns that students might need to find out about include, in approximate level of frequency and usefulness:

That list will be different if you are concentrating on non-defining relative clauses (ones with commas – and therefore pauses – that give optional extra info like “That building, which we also thought about living in, blocks our light for most of the day”). After commas, the only possibilities are:

For that reason, you could argue that “that” is less useful than “which” and so should be further down the first list. However, unlike “which”, “that” can also be used to talk about people in defining relative clauses like “He is the postman that once brought me two thousand fan letters”.

“Why” is low in the list above as it almost always forms part of the expression “the reason why”, making it perhaps more suited to a lesson on cause and effect than on relative pronouns. “When” and “where” can also be used outside of the expressions “the time when” and “the place where”, making them much more common and useful than “why”. However, they can usually be replaced by “preposition + which”, as in “That was the part of my life when I was happiest”/ “That was the part of my life in which I was happiest”.

“Whom” is lowest of all in the list above as it is very rare in modern English and can seem pretentious, being usually replaced nowadays with “who” or “that”.

Looking at the middle of the ranking above, there are two reasons for having no relative pronoun. The simplest is taking out “which” etc when it is followed by a subject in a defining relative clause, making what is sometimes called a contact clause, as in:

How to present relative pronouns

In order to teach a lesson specifically on relative pronouns, you probably need to present them as part of a lesson on relative clauses more generally. However, you might also want to revise and expand on such a presentation stage when you start a lesson focussing on relative pronouns, so that students can remember which relative pronouns can go in which situations and perhaps when they can be taken out. Unfortunately, to have enough sentences to elicit every rule, you’d need at least eleven examples with different kinds of relative clause and relative pronoun. This is unlikely to occur naturally in one authentic text, is difficult to squeeze into one made-up text, and can quickly get boring as a list of unrelated example sentences.

A much more compact way of presenting relative pronouns is to give students only examples which are wrong, asking them to correct them and then to work out the rules from those corrected examples. For example, if they correct “My mother’s bicycle, that I was transported on back when I was small, has reached the end of its life” to “My mother’s bicycle, which…”, they can work out that “that” is not used in non-defining relative clauses. Similarly, if they work out that “I hate foods make me feel bloated” should be “I hate foods which/ that…”, they can then find out the rule that relative pronouns can only be taken out before a subject.

If you want to make such a correction task more challenging and with more good models, you could do this as an odd one out activity where only one sentence in each group is wrong. Alternatively, you could make the wrong sentences a mix of wrong grammar and incorrect information (about the school, the town you are in, recent news, etc).

How to practise relative pronouns

The last of those error correction tasks can also be one of the most useful activities in the practice stage. One possibility is to give students cards saying “First sentence” and “Second sentence”. Students race to hold up the correct cards to show which sentences they think are correct. As well as holding up one or the other, they can hold up both cards if both sentences are okay (e.g. with both “which” and “that” in defining relative clauses) or keep both cards down if both examples are wrong (e.g. “that” and zero relative pronoun in non-defining relative clauses).

Error correction could also be done as a pairwork task where Student A and Student B have different versions of the same sentences. In that case, students read the sentences out and find the differences. They then together decide if both, one or none of the sentences are correct, correcting any which are wrong.

Make cards for each group with one relative pronoun on each, for example cards with “that”, “which”, “who”, “whose” and maybe “-” (meaning no relative pronoun). Students listen to or are shown a gapped sentence like “Justin Trudeau, BLANK is married to my cousin, has been in all the papers” and have to rush to slap the relative pronoun or pronouns which could go in that gap (in this case only “who”). If you are scoring, students get one point for each correct card that they slap first, but lose one point for each incorrect card that they slap.

In the rare situation of having lively kids studying this quite complex grammar, the same can also be done with students running and touching one or more of those cards on the walls, throwing something at those words on the board, pretending to shoot those words, etc.

Relative pronouns strangers on a train

Make a pack of cards with one relative pronoun on each (including a blank card to mean no relative pronoun if you want to cover that). Give students at least one card each. Ask them to roleplay a situation such as meeting strangers on a train and to drop the word on the card naturally into the conversation while they are speaking. When you finish, they get one point if they did so with a correct relative clause which no one else spotted. Before or after using their own sentences to drop in the relative pronouns, you could also give them a whole sentence with a relative pronoun or none like “My brother I was closest to isn’t speaking to me anymore” to try to use without anyone spotting that is sounded strange.

Change as many relative pronouns as you can

There are different possible storytelling tasks for this grammar, but maybe the only one which focuses more on relative pronouns than on relative clauses more generally is to give them cards with one relative pronoun on each to use as they tell a story. If they might lack the imagination to get started, you can give them a starting line (“John was the manager who was least popular”) and/ or a genre to stick to.