How to teach link verbs/copula verbs

Summary: How to teach verbs that take adjectives instead of adverbs, with linking verb games and other copula verb practice activities 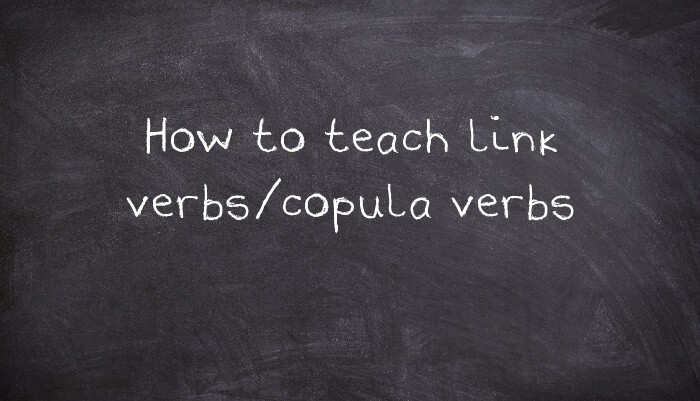 Students who have got used to using adverbs in sentences like “He bounced back quickly and eventually starred in the biggest film of all time” often then find themselves struggling with seemingly simpler sentences that don’t need –ly like “He looks angry”. Such verbs that take adjectives rather than adverbs are called copula verbs, link verbs, copular verbs or linking verbs, because they link that adjective to the subject of the sentence, rather than to the verb. Although you will find some different uses of those terms, this article uses “copula verbs” and “link verbs” interchangeably.

What students need to know about link verbs/ copula verbs

The good news about copula verbs is that even very low-level students have already been using at least one with no problem, as the verb “be” takes adjectives (“It is huge”) instead of adverbs (not “It is hugely” X).

Given that students have few fundamental problems with “be”, it should be fairly easy to understand that “become” also takes an adjective in “It has become dangerous”, as “become” is basically a version of “be” that is used to talk about changes. The same is also true of “get”, “grow”, “go” and “turn” when they have the same meaning (“It got/ grew/ went/ turned dark”, not “darkly”). Verbs with the opposite meaning of not changing such as “stay” and “remain” are even closer to “be” and so also take adjectives (“Stay silent”, “Remain calm”). Much less commonly, the “prove” in “prove elusive” has the meaning “turned out to be”, and so is not “proved elusively” X.

The other main group of copula verbs can also be explained in a way that starts with “be”. Because “I think that it is broken” has an adjective, the equivalent sentences with verbs of perception “It seems to be broken” and “It appears to be broken” obviously should too. The same is true of similar verbs of perception that base our judgements on one sense or another in “It looks delicious”, “It sounds dangerous”, “It smells burnt”, “It tastes exotic” and “It feels sharp”.

To summarise, the three groups of copula verbs are:

And common examples of such verbs are (in order of the three categories above):

Perhaps the most common mistake with link verbs is using them with adverbs instead of adjectives, as in “His cheeks turned redly” X. As the concept on copula verbs is quite easy to understand and similar in most other languages, these mistakes are probably just due to students being in the habit of putting adverbs with verbs in English sentences. However, in English it is probably not helped by the tendency of even some native speakers to overcorrect and say “I feel badly for you” X.

Another problem is that most of the verbs above do take adverbs if we are describing how the action was done instead of describing the subject. Examples include:

Many of these examples also have a complement that is an adjective or noun, but simply add an adverb which describes how the action was done (as in “It is slowly getting worse”) and so aren’t very different from other examples of copula verbs. The others have different meanings to the copula verbs and so are basically just different verbs, e.g.

There is more on the verbs of senses in an article on that topic on this site.

How to present copula verbs

Even after writing a whole article on the topic, I’m not sure that I would ever put a lesson on copula verbs on the syllabus, as some students will simply pick them up naturally through reading, comparisons to L1, etc. Three other options are:

If you want to use a text to present copula verbs, descriptive passages from fiction are most likely to bring up all three types described above, e.g. by including a man turning red and looking angry. However, you might need to write your own short passage if you want two or three examples of each kind of copula verb, especially if you want to add some examples of verb + adverb for contrast. After a comprehension task such as matching the adjectives to the characters and then reading to check, students should easily be able to generalise on what kinds of verbs take adjectives.

When it comes to contrasting verbs with adjectives and verbs with adverbs, you’ll need to decide if you want to bring up ones that could cause misunderstandings like “He looked angry” (= he appeared to be angry) and “He looked angrily…” (= he glared). The advantage of this kind of contrasting is that you can show how this grammar can sometimes be important, but the disadvantages are that it probably overstates that importance (as such cases are actually rare) and can cause students to become confused and/ or panic. You can design the practice activities below to bring this up (by including “looks” and “look at”) or to avoid it (by only including adverbs of manner, not adverbs like “eventually” that can go with most of the verbs above).

Some of the practice activities below such as a list dictation or a brainstorming race can be used before the presentation.

How to practise copula verbs

Students listen to phrases and sentences with a gap, beep or “la la la” where an adjective or adverb would be and raise a card with “-ly” if they think an adverb should go there or a card with a crossed off “-ly” to show that it should be an adjective. This should start with easy examples where the kind of word is obvious such as “run quickly” and “keep calm”. It can then continue with contrasts like “It looks BLANK” and “He looked towards her window BEEP”. If possible, it’s good to include examples that students might come across elsewhere such as names of songs and proverbs that include link verbs.

With young learners, livelier versions of the simplest responses game include running and slapping two walls, and throwing something at two sides of the whiteboard.

Make a list of real-life examples of copula verbs such as quotes with “seem”, names of films including the word “look”, and proverbs with “smell”. Students listen to examples which include one of the verbs, but with the verb taken out. As soon as they are sure which verb is missing from all the examples, they can guess. They get one point if they are right, but lose a point and/ or can’t guess again until someone else has tried if they are wrong. They must guess the verb in the original sentence, even when something else might be possible.

Students use a mix of copula verb + adjective and verb + adverb to make a story. Ways of organising this include:

Using a coin to decide if the next thing should be with an adjective (heads) or adverb (tails) can be used for storytelling (see above), finding things in common, or bluffing games.

Students are given categories including copula verbs and have a short time (e.g. three minutes) to write as many examples as they can, with points for any correct ones that other groups didn’t think of. To include lots of the language, you can ask them to write all their examples in full sentences, e.g. “Cheeks turn red”, “Tomatoes turn red” and “The sky turns red” for “Things that turn red”. After a few rounds of this, students can try to remember the copula verbs which were in the brainstorming tasks and/ or analyse what kinds of verbs they are.

To contrast copula verbs with actions, you could also include categories with adverbs like “Things that old people do slowly”.

If you give students a list of suitable things to describe with link verbs, they can either give descriptions like “It turns green” until their partner guesses that the answer is “It’s a frog” or choose an object and take turns brainstorming suitable descriptions with copula verbs such as “It seems cheeky” for “monkey”. Animals is a particularly good topic for this. To make for more of a range of language, you’ll need to ban or limit using simply “be”.

Students try to find sentences with copula verbs which are true for both of them such as “Hawaii seems perfect to me” and “My face turns blue on a cold day”. This can be done with a list of verbs, a list of topics and/ or sentence stems like “I’m getting…”, plus maybe suitable action verbs and/ or adverbs if you want to contrast them with copula verbs. As mentioned above, the contrast can also be practised with a dice.