How to teach reporting verbs

Summary: How to teach the meaning and grammar of verbs for reporting what other people said, including reporting verb games 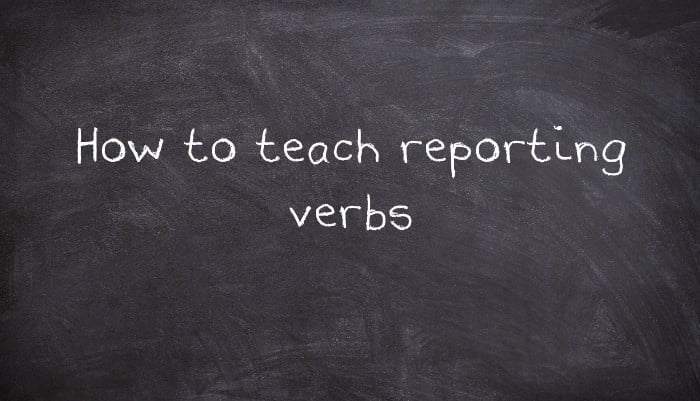 Instead of confusing students with shifts in tenses that native speakers usually skip anyway, we should probably be spending most or all of the time allocated for reported speech on verbs like “claim”, “warn” and “ask”. As well as changing a fiddly and communicatively unimportant grammar point into a source of lots of lovely vocabulary, lessons on reporting verbs tie in well with:

This article gives tips on which reporting verbs to teach, what to teach about them, and how to practise them in communicative, and often fun, ways.

What students need to know about reporting verbs

The first thing students need is just a selection of verbs to get them away from just “He said… She said… Then he said… And she said…” In approximate order of when I would teach them, examples include:

The main mistake that students will make in using them and therefore probably the next thing they need to know is what comes after the verb, mainly meaning verb patterns like “agree to do”, “ask someone to do something” and “recommend going”. As with verb patterns more generally (dealt with in another article on this site), verbs with similar and opposite meanings often (but by no means always) have the same pattern, as in:

A related topic is reporting verbs which are followed by prepositions like “bring up doing” and “talk about doing” above. The prepositions are:

The most confusing of category is probably those with to, as all of these are followed by noun or -ing form, unlike the verb + infinitive forms above.

Although verb patterns and prepositions are likely to produce the greatest number of student errors, most of these have little effect on communication. In contrast, confusion between similar verbs can cause actual confusion during communication. Common confusions that might need clearing up include:

Some of these confusions are due to L1 interference, as in “claim” in Japanese meaning “complaint” in English and the most similar verb to “discuss” in Spanish meaning “argue”.

Particularly in academic writing classes, you can split the verbs into groups such as strong and weak and neutral and not. However, this still leaves different ways of being soft/ weak etc to explain, so I tend to just deal with them in pairs or small groups as suggested in the Same or Different activity below.

How to present reporting verbs

As with reported speech more generally, perhaps the easiest first stage is to get students to convert back to direct speech. This can include revision of functional language that they have studied if you include things like “He requested that I sit closer” to convert to “Can you sit closer?” and “He invited me to a Greek restaurant”  to change back to “Would you like to come to a Greek restaurant?” As with these examples, there are numerous possible direct speech sentences for each reporting verb, so there is no point having suggested answers. However, you should probably check that they haven’t confused the meanings of the reporting verbs.

Although it is difficult to include the most useful verbs and good examples of verb patterns whilst also making it sound natural, it is possible to do all of this with a single dialogue in which the speaker(s) report what other people said. Reasonably realistic situations for a dialogue with lots of reporting verbs in it include:

After reading or listening for comprehension with questions like “Who has more problems with their boyfriend?” or “What are the problems and which solution do they agree on?”, students can do the converting back and forth and analysing stages that were just suggested for example sentences.

Some of the practice activities below could also be done at the presentation stage, but you might need to give more help, e.g. giving the verb patterns in the sentences to be completed in the sentence completion games.

How to practise reporting verbs

Perhaps the best practice of verb patterns after reporting verbs is to give students sentence stems that they should be able to complete at least half of like “My father congratulated ____________________” and “A teacher encouraged ____________”.

There are a few different games which can be played with these. The simplest is just getting them to find things in common (in which case you might want to give them the sentences as “Our fathers congratulated…” etc). A more fun option is a bluffing game, where they fill the sentences with a mix of true and made up info, read one out, answer questions about that conversation, then their partner guesses if the original sentence was true or false. Finally, and perhaps best practice of the grammar, is a guessing game where they read out what they have written in one gap and their partner tries to guess what sentence it comes from.

As well as the sentence completion guessing game above, students can:

As well as the sentence completion bluffing game above, you can also just get students to pick a card with a reporting verb on, then say something using that verb as soon as they can like “I agreed to help a friend move next week” for “agree” or “My brother-in-law claims that he can kill a man with his bare hands” for “claim”. After asking questions about that statement, their partners guess if the statement was true or not. Asking students to choose cards at random and then produce sentences quickly should naturally produce a mix of true and made-up sentences, but you can also emphasise that they should mix the two kinds up. Providing a mix of easy to use verbs like “tell” and more difficult ones like “beg” also helps with this.

This is one of my favourite activities for this point. Give students reporting verbs that often come up in anecdotes and other stories like “warn” and “suggest”, with one word on each card, plus maybe a first sentence for the story like “George didn’t know what to do on his summer holiday”. Students take turns continuing a story, using at least one reporting verb each time if they can, but also any other sentences which make the story progress. If they lay the cards out in order as they make the story, they can then tell the story to someone from another group in the next stage.

If you give students discussion questions including reporting verbs like “How often should students be congratulated for what they do at school?” and “Should someone get a less serious punishment if they admit to doing the crime?”, students can later be tested on their memory of the prepositions, verb patterns etc with gapped or split versions of the discussion questions. Alternatively, you can just design questions that should produce reporting verbs in the students’ answers such as “What is the most inspiring thing that a teacher could say or do at school?”

As well as the speaking games above, students can put cards with reporting verbs into columns by the verb pattern, using the pattern of similar and opposite verbs often being in the same column to help.

They can then play games where they try to memorise what goes after each reporting verb such as pelmanism/ pairs/ the memory game (in which they turn all the cards face down and then try to find two which take the same form) and snap (in which they take turns showing one of their cards and race to shout “Snap” when the two last cards are followed by the same form).

For freer practice, students can do storytelling. This can be done with the same cards, but it can also be done with cards which say “someone + to + verb”, with them putting a suitable matching reporting verb in front of that structure when they add that card to the story.

Storytelling and other activities can also be done with a coin or dice, for example by flipping a coin between each line of the story to see if they should add “reporting verb + infinitive” (if heads comes up) or “reporting verb + verb with -ing” (for tails). Another option is rolling a dice to see if the next line should be “verb + infinitive” (if they roll 1 or 2), “verb + gerund” (3 or 4) or “verb + someone” (5 or 6).

Coins and dice can also be used to decide what kind of reporting verb they should use for finding things in common, bluffing games, etc.

You can also practise this with storytelling, with the same verb cards, or with cards with just prepositions on which students should use with relevant verbs.

Reporting verbs the same or different

Students listen to two or more example sentences with different reporting verbs and hold up a card saying “The same” if they hear “He ordered me to stand up” and “He commanded me to stand up” or the “Different” card if they hear “She asked me to smoke outside” and “She told me to smoke outside”. As well as dealing with common confusions this way, it’s nice if the sentences include a mix of ones which have the same verb pattern and the same meaning and a few which have the same meaning but different verb patterns (“recommend” and “advise”, etc).  After writing “S” for “the same” and “D” for “different” next to the same sentences on a worksheet and checking their answers, students can play the same raising cards game in groups and/ or be tested on their memory of ones which mean the same.