How to teach quantifiers

Summary: How to present and practise "a few", "some", "many", "most", etc, including communicative quantifier practice games and activities. 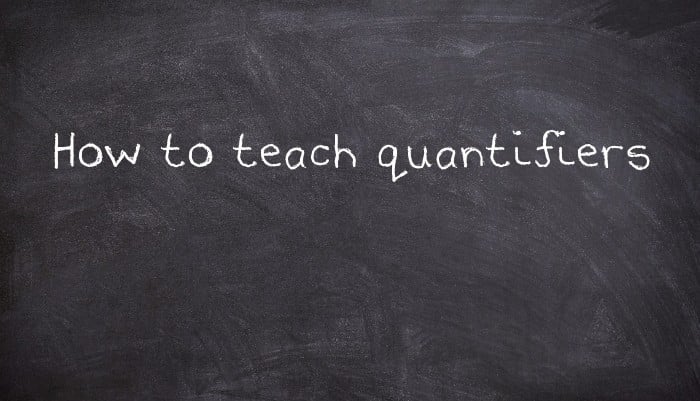 “How many” is one of the most basic questions in English, sometimes taught even to very young learners with “How many apples (are there)?” and “How many brothers and sisters (do you have)?” being used with basic numbers. However, once you try real communicative tasks, students are just as likely to want to answer with quantifiers like “many” and “quite a lot”, meaning a lesson on quantifiers is vital at almost all levels. This might start with “some” at low levels, need to be done again when they cover countable and uncountable nouns, and still be continuing with more idiomatic or formal quantifiers like “stacks of” and “a substantial amount” even at Advanced level. This article explains how to present and practise a whole bunch of such quantifiers, including typical difficulties with quantifiers, and quantifier games.

What students need to know about quantifiers

Perhaps the most important thing that students need to know about quantifiers is how they compare to each other in terms of number/ amount. For example, a possible ranking of the quantifiers which I cover with most of my Upper Intermediate classes is:

I’ve called this a “possible ranking”, as much of the list is debatable, especially when it comes to comparing quantifiers which are percentages (“most”, “a minority”, etc) and quantifiers which are numbers or amounts (“many”, “a few”, etc). To put it another way, some quantifiers are answers to “What proportion…?” but others are answers to “How many/ much…?” This means that although “almost no” is a tiny percentage, as a number it is often higher than “a few”, for example if we are talking about a minority of the world population. This also means that with this suggested ranking it is not possible to put in quantifiers like “many many” (because it is impossible to say if it is generally above or below “most”).

Despite all that, I find that the oversimplified ranking above works with most of the communicative ideas below, and the discussion of these complications is generally productive rather than confusing. However, teachers might prefer to present individual rankings of ones which are percentages and/ or ones which are numbers. This also makes it easier to give examples of numbers which match, as in:

There are also many other expressions meaning “a lot” such as “heaps of” (dealt in an article specifically on “much”, “many” and “a lot of” on this site). There are also words which are on the borderline between numbers and quantifiers like “dozen” and “hundreds”.

Quantifiers which don’t fit into the rankings above but are still useful include:

Most of those don’t fit in the ranking above because they focus on if the number is good (“enough”, “plenty”) or bad (“too much/ many”, “too little/ few”, “not enough”). Positive and negative connotations are also often used as an explanation of the difference between “I have few friends”/ “I have little money” (meaning not enough/ depressingly low) and “(I’ve only been here two weeks and already) I have a few friends” and “I have a little money (spare, so let’s splash out)” (meaning enough/ more than you might think). This works, but it also needs to be mentioned that two negatives make a positive in “I have few problems” (which is a good thing).

Along with the two kinds of quantifier above (ones which are numbers and percentages, and ones which have different connotations), other distinctions include:

Other complications with the quantifiers above include:

Quantifiers with more than one meaning include:

There are some variations to these. For example, “a couple people” is fairly common, especially in American speech.

Most other quantifiers are usually followed by an object without “of” to make general statements (“some people”, etc), but need “of” to talk about specific things with “them” or determiners like “the”, “those”, and “my” (“some of the best people”, “some of those lovely looking cakes”, “some of them are idiots”, etc). Ones which work this way include:

“Each”, “either” and “neither” are similar, but always need singular nouns so are “each/ either/ neither (person/ of them)”. “Every” needs the extra word “one” before “of” or when it ends a sentence (“every person/ every one/ every one of them”), and “no” changes to “none” in those situations (“no people/ none/ none of them”).

Especially once you have cleared up the difference between percentages and numbers/ amounts, students generally find the rankings and example numbers both easy to use in communication and fairly memorable. However, students still tend to seek translations of the terms. This is not a good idea, as there are rarely words which have exactly the same meaning(s), level of formality and connotation as the English words and expressions do.

Apart from that. students mainly have understandable problems getting used to the many complications listed above (connotations, countable and uncountable, ones with more than one meaning, etc).

Perhaps because they are more used to seeing ranking with those topics, some students get confused between quantifiers and expressions of frequency (e.g. confusing “usually” and “most”), especially if they are asked to brainstorm and rank suitable phrases. If you then link to the topic of generalising/ hedging more generally (as I often do), they may also later get mixed up with expressions of possibility/ probability such as “probably”.

How to present and practise quantifiers

The first thing that you need to decide before teaching this grammar point is how many quantifiers to present and practise in one class. That could be just “much”, “many” and “a lot of” or just “some” and “any”, but with higher-level classes could include most of the ranked ones above. As there are individual articles on particular quantifiers like “much” and “some” on this site, this article will concentrate on classes which cover a range of different quantifiers.

Although some textbooks attempt it, it is nearly impossible to have a realistic spoken or written text that includes ten or more quantifiers in a way which shows their meanings. Instead, with this point I almost always use a technique which I call URA (Use Recall Analyse). In this case, URA starts with simply giving students the list of quantifiers in the right order and asking them to discuss something in the Use stage such as which they think describe particular aspects of the town that they are in such as the traffic and excitement. You then hide the list from them and see how much they can remember for Recall. Finally, you get them to think more about the language in the analyse stage, for example by matching the determiners to definitions (“a negative expression meaning a small number, used with plural nouns” for “few”, etc) and/ or putting them into categories (by formality, if they need “of” or not, etc).

The practice activities below can be used at either the presentation or practice stage, with the ones near the top particularly good for the initial Use activity.

Although this is a little trickier than Things in Common, it is usually more interesting if you do the initial and/ or practice discussion with opinions sentences like “All/ Virtually all/ Almost all/ The vast majority of/ Most/ Some/ A minority of/ A small minority of/ A tiny proportion of/ Almost no/ No politicians care more about the country than about their career”. To help the discussion, you should probably give them useful phrases to use like “That’s exactly what I would say”, “I would go further and say that…” and “I wouldn’t go that far. I would say that…” Later discussion can be done with similar sentences with mixed quantifiers, with gapped sentences, or with quantifiers to use and suggested topics.

Discussion questions can include quantifiers (“Are there enough parks in this city?”) and/ or be designed to elicit quantifiers in the answers (“What proportion of police abuse their power, do you think?”). They could also include more personal questions like “How many people in your family speak English really well?”

Give students a ranked group of quantifiers with the smallest at the bottom, perhaps in a table or on the steps of a ladder to show them that they should climb up from the bottom. Students ask questions to get those answers in the same order as the ladder, from the bottom (e.g. trying to get a “No” answer) to the top (e.g. trying to get an “All” answer). If they can get the answer of the step that they are on from their partner, they can move to the next step up and then try to get that answer. If they get a different answer, they fall back down to the bottom of the ladder and have to try again. However, they can reuse the same questions (if they can remember them) and copy questions from other people in later tries. The winner is anyone who can climb the whole of the ladder from bottom to top in one go.

Students ask a question (“How many vending machines are there near my house?”) or read out a gapped sentence (“I spend _____________ time watching streaming services”), listen to their partner’s first guess, then give hints like “Much more” and “Quite a lot lower” until their partner gets exactly the right answer.

Students share their lives and ideas and/ or ask each other questions and get one point for each time that their answer is higher than their partner’s. For example, if they ask “What percentage of your friends regularly go to the gym?” and their partner answers “A tiny proportion. How about you?” and they answer “Some”, the person who asked the question gets one point.

Students are asked to come up with their own ideal business, ideal world, etc with the quantifiers. For example, they could decide that in their “The Beach”-style idyllic community “All members will have to cook” and “All members over 15 will be able to vote” but only “A few elected members will make the vast majority of day-to-day decisions (to stop wasting too much time on endless discussion)”.