How to teach irregular plurals

Summary: Teaching tips and classroom activities for plurals without -s like "children", "sheep" and "alumni" 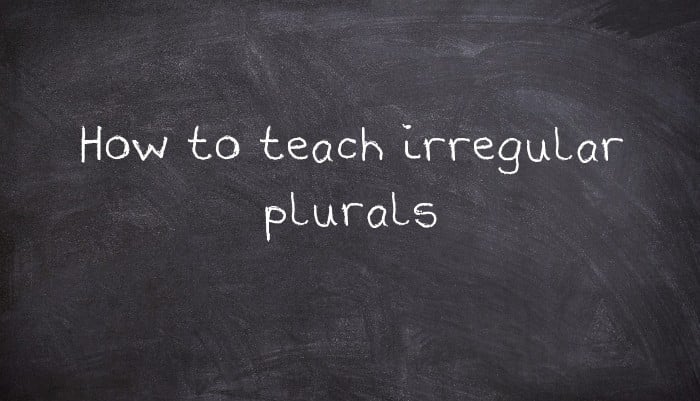 Although textbooks spend much more time on the spelling and pronunciation of “-s” and “-es” endings in words like “churches”, students generally have much more trouble understanding and using words like “people” and “some sheep”, and often from very early in their language learning. Irregular plurals can also be the real reason behind what at first sight seemed problems with countable and uncountable nouns like “The children is…” This article gives tips on how to deal with those difficulties, as they come up and/ or in a whole class on the topic.

What students need to know about irregular plurals

At the early stages of their learning, students simply need to know that a few words that they come across like “woman” and “foot” don’t take “-s” to make a plural. These irregular plurals have different plural forms like “women” and “feet”, but these forms are used in exactly the way as “girls” and “hands”, making “Three women” and “The feet are…”correct. I would probably just teach the forms in the Elementary and Pre-Intermediate sections below item by item as they come up in this way.

When it comes to an actual lesson on plurals, students might gain from knowing that there are patterns such as many kinds of fish and some animals having the same singular and plural form (“Two moose”, “Many tuna”, etc) and words ending in “-f” often changing to “-ves”. Other useful patterns to mention or get students to work out include:

You could also mention words that end in “-o” but take “-es” as in “potatoes”, “tomatoes”, “heroes”, “echoes”, “torpedoes”, “dominoes” and “vetoes”, as they don’t fit in the normal group of words which take “-es” (“flashes”, “passes”, “churches”, etc). And you could also mention ones which have “s” in a difficult place like “passers-by” and “sons-in-law” as part of the topic of irregular plurals.

The most useful irregular plurals to teach (by level)

The most common student problems with irregular plurals are:

There are also a few issues that even native speakers have problems with. Perhaps the trickiest is “data”, which is the plural of the almost never used word “datum”. Because of that, because it is almost never used with a number like other plurals (“Three data” sounding strange) or because it is similar to the uncountable word “information”, in informal and/ or British English it is increasingly being treated like an uncountable word, making “The data has changed” increasingly acceptable. However, in written and/ or American English people are still quite fussy about using it as a plural in sentences like “The data are valuable”.

How to present irregular plurals

As mentioned above, the first time that I present the idea of irregular plurals is not in a lesson on the topic but rather when students are having problems like “The people is…” X or “There were many sheeps” X At this stage just correction is probably enough, along with an explanation on the board that it goes “one person two people three people” and “one sheep two sheep three sheep”. You could also give irregular plurals a brief mention when teaching regular plurals.

After a few weeks, months or even years of just touching on the topic, students are probably ready for an actual lesson on irregular plurals. At that point they will probably already know that we say “One child, two children” and “The children are…” rather than “The children is…”, even if they often still make mistakes with it during communication. You can use this knowledge to elicit the idea of irregular plurals and what verb forms they go with and/ or start one of the practice activities below like the Simplest Responses Game or the Simple Regular and Irregular Plurals Presentation with words that they already know. Higher level students could also do a whole lesson on different problems with plurals also including other issues such as words with no singular like “scissors”.

Starting with some that they know already, put pairs of similar words on a worksheet with one that has a regular plural and one that has an irregular plural in each pair, e.g. “boy” and “child” on one line and “sheep” and “goat” on another line. As well as pairing up words which have similar meanings, you can also group together words which look similar but change in different ways like “roof” and “dwarf”. Students try to work out which one in each pair just takes “-s” and then try to remember or guess what the plural of the other one is. You can then help with hints like “Fish usually have the same singular and plural form” and “-f often changes to -ves”.

How to practise irregular plurals

As mentioned above, students who have some knowledge of this topic could perhaps start with one of the practice activities below before you test them on their memories of the language that they used.

Give each student one card saying “Singular/ 1” and one card saying “Plural/ 2 or more”. Students listen to singular and plurals forms of the words that you want to teach like “child” and “policemen” and raise the “Singular/ 1” card or the “Plural/ 2 or more” card that you have given them depending on which form they think they have just heard. After a few examples of this, you can also introduce words which are both singular and plural like “salmon”, in which case they should raise both cards. They can then label the same words on a worksheet with “1” and “2 (or more)” and/ or try to remember the plural forms that you said during the game of the singular forms on a worksheet. If students are likely to have problems with this, for example because you are doing it as a presentation stage, you can then read out the same noun in a sentence to give context and help them check their answers.

Find song names, book names and movie names with the words that you want to present like “knives” in them and change them to have the singular or wrong plural form in them. It’s best if most examples also have other nouns in which you have left unchanged. From their knowledge of the plurals and the names of the original things, students try to correct all the mistakes. You could then do a speaking activity where one student defines one of the things without saying its name and the other person tries to think of its title without looking at the list.

Make cards with the singular on one side and the plural on the other. It’s best if the words on the cards are mainly ones which students also have problems with both sides of like “phenomena” (because students often can’t remember the singular either). Students spread the cards across the table, either side up.

One student tries to guess what is on the other side of the cards and turns over to check, leaving the cards the other way round if they are right. There are several possible rules for playing this game. The simplest is for students to try as long as they like and then deciding when to give up, losing all the cards from that round if they make a mistake before they “stick”. Another simple way to play is for the longest string of correct answers during the game to win, e.g. Student A winning if they managed 12 cards in a row without a mistake at some point during the game. For really intensive practice, you can also put the cards in a column to represent a ladder and get students to start from the bottom of the ladder again every time that they make a mistake.

Make a list of things that students might need for a purpose such as camping, a buffet, setting up a restaurant or drawing a picture representing their country. Add some words which take -s if you want to make the practice more challenging and/ or you can’t think of enough suitable words with irregular plurals. Students discuss which things on the list they need and how many of each one. After they finish the speaking activity and maybe share their conclusions with another group, test them on the plural forms of all the nouns on the list.

Give students a list of nouns with irregular plurals which could be used in a story like “dwarf”, with their plural forms if they won’t know them and/ or you are using this activity at the presentation stage. Students take turns adding those words to the story until they can bring the tale to some kind of an ending, then try to remember the singular and plural of all the nouns that they used.